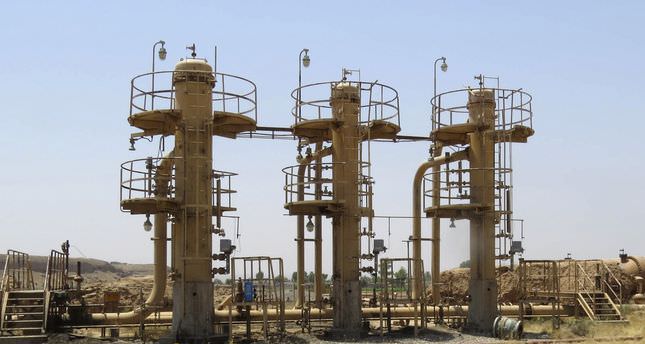 by Daily Sabah Aug 03, 2014 12:00 am
Self-proclaimed Islamic State of Syria and al-Sham (ISIS) militants have captured two Northern Iraqi towns and an oil field in their first major victory over Kurdish fighters, witnesses said on Sunday. However, the Kurdistan Regional Government's (KRG) crude oil exports via Turkey will go on without interruption, an expert told Daily Sabah.

The al-Qaida offshoot, which swept through Northern Iraq in June almost unopposed by Iraq's U.S.-trained army, poses the biggest challenge to the stability of the country since the fall of Saddam Hussein in 2003. After thousands of Iraqi soldiers fled the ISIS offensive, Shiite militias and Kurdish fighters have emerged as a key line of defense against the militants, who have threatened to march on Baghdad.
KRG forces provided reinforcements, including special forces, to the town of Zumar this weekend to battle ISIS fighters who had arrived from three directions on pickup trucks mounted with weapons, residents said. ISIS also later seized the town of Sinjar, where witnesses said residents had fled after Kurdish fighters put up little resistance against the militants. ISIS has stalled in its drive to reach Baghdad, halting just north of the town of Samarra, 100 kilometers north of the capital.

ISIS changed its name earlier this year simply to the Islamic State and declared a caliphate in parts of Iraq and Syria. The group has already seized four oil fields, which help fund its operations. The group has been trying to consolidate its gains, setting its sights on strategic towns near oil fields, as well as border crossings with Syria, so that it can move easily back and forth and transport supplies.

Kurds have long dreamed of their own independent state in Northern Iraq, an aspiration that has angered Iraqi Prime Minister Nouri al-Maliki, who has frequently clashed with the KRG over budgets, land and oil. After ISIS arrived, KRG forces seized two oil fields in Northern Iraq and took over operations from a state-run oil company.

In July, the Kurdish political bloc ended participation in Iraq's national government in protest over Maliki's accusation that Kurds were allowing "terrorists" to stay in Irbil, capital of their semi-autonomous region known as Kurdistan. In another move certain to infuriate the Baghdad government, the Kurdish region is pressing Washington for sophisticated weapons it says Kurdish fighters need to push back the Islamist militants, Kurdish and U.S. officials said. But Maliki needs Kurds to help defend his government.

Maliki is currently ruling in a caretaker capacity, having won a parliamentary election in April but failing to win enough support from the Kurdish and Arab Sunni minorities, as well as from fellow Shiites, to form a new government. He has rejected calls by Sunnis, Kurds and Shiites to step aside so a less polarizing figure can form a government capable of easing sectarian tensions and countering the insurgency. An official from the Northern Oil Company said ISIS fighters had taken control of the Ain Zalah oil field and two other undeveloped fields – Batma and Sufaiya. "Hundreds fled leaving vehicles and a huge number of weapons and munitions and the brothers control many areas," ISIS said. "The fighters arrived in the border triangle between Iraq, Syria and Turkey," it said.

Speaking to Daily Sabah, Professor Dr. Erdal Tanas Karagöl, the economy director of the Foundation for Political, Economic and Social Research said that the KRG is expected to take any necessary measures to provide production and transportation security of crude oil that it exports to Turkey and international markets via Turkey. "The KRG obtained politic and economic gains during the last clashes between insurgents and the Iraqi army. They were able to commercialize crude oil that is extracted from oil fields in their formal territory. The KRG does not want to lose its gains, so they will not allow ISIS to hurt their oil exports to Turkey," Karagöl said.

Last December the KRG administration completed construction of the Taq Taq-Khurmala-Fish Khabur pipeline that connects the Taq Taq oil field to the entry point for the Kirkuk-Ceyhan pipeline. The KRG currently has the capacity to export approximately 120,000 barrels of crude oil per day to Turkey's Mediterranean port of Ceyhan and KRG officials recently said they will increase oil exports to Turkey from 120,000 barrels per day to 400,000 by the end of the year.