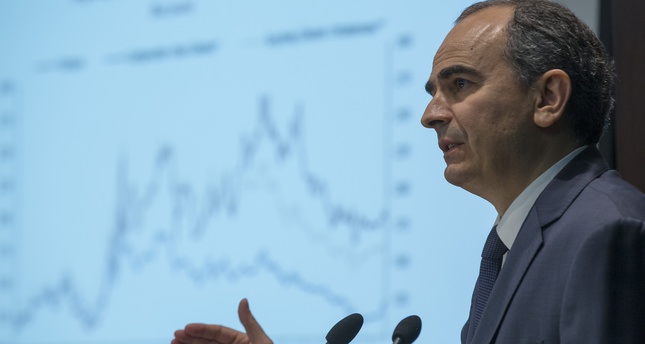 by AA Aug 04, 2014 12:00 am
Inflation in Turkey rose slightly last month, from 9.16 percent in June to 9.32 percent, mainly due to a rise in alcohol, tobacco, communications and restaurant prices, the country's statistical authority said.


The Turkish Statistical Institute (Turkstat) reported the consumer price index rise on Monday, putting annual inflation well above the Central Bank of the Republic of Turkey's (CBRT) year-end forecast of 7.6 percent and even further beyond the 5 percent medium-term target.


Alcoholic beverages and tobacco rose by 1.99 percent while communications services jumped 1.9 percent and the prices in hotels, cafes and restaurants rose 1.05 percent between June and July.

There was a 3.28 percent monthly fall in the price of clothing and footwear.


Compared to the same month last year, there was a 13.74 percent increase in hotel, cafe and restaurant prices, while food and non-alcoholic beverages rose by 12.56 percent, according to Turkstat.

The bank anticipates that inflation will slow as demand for exports rises, leading to a significant improvement in Turkey's current account deficit for 2014.


In January, the bank introduced drastic interest rate hikes in response to the rise of the U.S. dollar against the Turkish lira.

Governor of the Central Bank of the Republic of Turkey Erdem Başçı has insisted the bank would only reduce interest rates when it is convinced the outlook on inflation is improving.


However, despite annual inflation hovering at almost double its medium-term target, the bank cut benchmark interest rates for three consecutive months to 8.25 percent on July 17, in an attempt to boost economic growth.

By comparison, inflation in the eurozone fell from 0.7 percent in April to 0.5 percent in May, well below the European Central Bank's overall target of two percent.