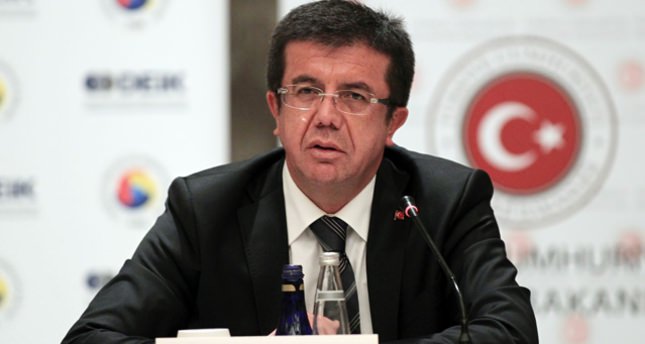 by Daily Sabah Aug 06, 2014 12:00 am
Turkey's economy minister called for the central bank on Tuesday to cut interest rates toward levels expected by markets, and warned against an upward revision in the end-of-year inflation targets despite higher than expected July data. "Market expectations for the cost of financing at the moment are at a lower level than current interest rates because of the political and economic stability in our country," Nihat Zeybekçi said in a statement. He also said, "It is an absolute necessity...to ease interest rates towards expectations." Prime Minister Recep Tayyip Erdoğan, keen to maintain growth and repeatedly calling for sharp interest rate cuts, is arguing high rates cause high inflation. Governor of the Central Bank of the Republic of Turkey (CBRT) Erdem Başçı noted on June 24 that Turkey overcame unstable currency problems that pushed inflation up in the first quarter of 2014. He also said that inflation would decrease with the stabilization of currency prices.

"The decrease in inflation will accelerate in the near future," Başçı added. However, the inflation rate rose by 0.45 percent in July, only ten days after his inflation forecast that is considered a credibility-harming situation by economists. In a press release on the website of the Ministry of Economy, Zeybekçi highlighted that due to high interest rates, manufacturing and distribution companies choose to make short-term production and storage plans that cause increases in costs and prices.

Speaking to Daily Sabah, Dr. Kerem Alkin, a veteran economist and president of Istanbulbased Nişantaşı University, remarked that inflation in Turkey is boosted by both consumer's demand and costs. "The Turkish economy is not capable of meeting the public's needs. If Turkey wants to compete with European economies and be one of the top ten economies in the world by 2023, it should increase the production capacity of domestic industries, otherwise, a fight against high inflation would be nothing but a huge fail," Alkin said.

Also speaking to Daily Sabah, economist Dr. Cemil Ertem commented on the matter, stating that finance should be easily accessible and low-cost, if a country is trying to increase its industrial capacity. "Limited [industrial] capacity leads to demand inflation," he added.

In his statement, Zeybekçi said inflation in Turkey is not only boosted by demand. "Instead, companies which are incapable of storing and mass production because of highcost finance, are not able to answer the sudden increase in demand, which is the main driver behind cost inflation," Zeybekçi noted.

Data on Monday showed consumer prices rose 0.45 percent in July, exceeding a 0.15 percent forecast for an annual increase of 9.32 percent, near double the official 5 percent target, and undermining the central bank's case for further cuts. The bank, which has an end-of-year inflation forecast of 7.6 percent, trimmed its main one-week repo rate for a third consecutive month in July.

Zeybekçi said the July inflation data pointed to inflation coming out above market expectations, but argued against revising targets. "We see the possibility of our year-end inflation targets being revised upwards as unacceptable and unfair to Turkey, and the political and economic stability which has been achieved," he said.
Last Update: Aug 06, 2014 8:51 am
RELATED TOPICS