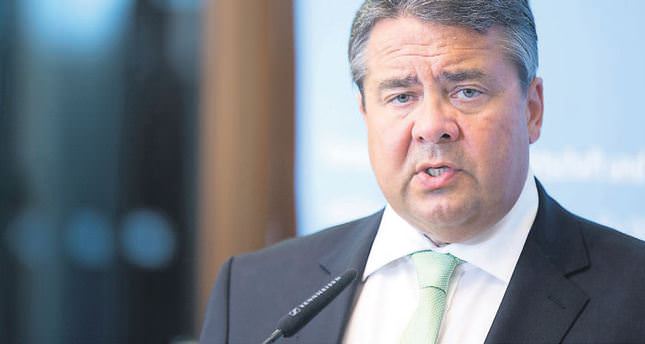 Tough new economic sanctions against Russia will hurt Germany's economy but they are necessary for the sake of peace in Europe, Vice Chancellor Sigmar Gabriel said in a television interview on Sunday

The European Union imposed sanctions that took effect on Friday targeting Russia's banking, defence and energy sectors because of Moscow's support for pro-Russian separatist rebels battling Kiev's forces in eastern Ukraine. "We can't behave as if we're just a community of economic interests, because we're a political union and have to do what we can to ensure peace on this continent," said Vice Chancellor Sigmar Gabriel, who is also economy minister and head of the Social Democrats (SPD).

Germany, the EU's largest economy, has extensive trade ties with Russia but Chancellor Angela Merkel became a firm advocate of the tougher measures against Moscow after the downing of an airliner last month over an area of eastern Ukraine controlled by the rebels.

All 298 people on board the plane were killed. "What would happen if the European Union didn't react?" Gabriel said in the ZDF TV interview, to be aired later on Sunday, the 100th anniversary of Germany's declaring war on France in 1914. "If all the lessons learned in Europe are that someone can start a civil war in a neighbouring country and nothing happens, then that would cost a lot more than a few percentage points of possible growth," he said. Gabriel said in the interview that economic setbacks as a result of the Ukraine crisis were unavoidable. "There would be much, much greater negative consequences if Europe did not act ... Where war and peace are at stake, economic policies can't be the main concern," said Gabriel, who has chaired recent cabinet meetings while Merkel is on holiday. "We're going to have disadvantages in Europe, but not doing anything would be much worse. That would mean it's possible to play with fire in Europe, and you could invade a neighbour or support civil wars next door ... Doing nothing is not something we can do."His comments came after the head of Germany's Ifo Institute, a leading independent economic research group, said German growth would shrink towards zero in the second quarter of 2014 from a healthy 0.8 percent in the first quarter, due in part to the worsening Ukraine crisis and sanctions.

Ifo president Hans-Werner Sinn wrote a guest column for Wirtschaftswoche magazine in which he said the worsening crisis meant the previous forecast of 0.3 percent growth in the second quarter from the first quarter would have to be revised lower. Sinn's outlook contrasts with less gloomy forecasts from other economists who have said even a complete collapse of Russian-German trade would have only a limited impact.

A recent Hypovereinsbank research note said losses would be "manageable". Germany had exports to Russia worth 36 billion euros ($48 billion) in 2013 - or 3 percent of all its exports. About 6,300 German companies, or 10 percent of exporters from Germany, have sales to Russia. Before the downing of Malaysian flight MH17 on July 17 by what Western countries say was a Russia-supplied missile, German industry had campaigned hard against Russian sanctions, warning of lasting damage to domestic companies and the broader economy. German business leaders had said a decline in German-Russian trade was putting some 25,000 jobs in Germany at risk. Some 300,000 German jobs are dependent on trade with Russia, the Committee on Eastern European Economic Relations says.