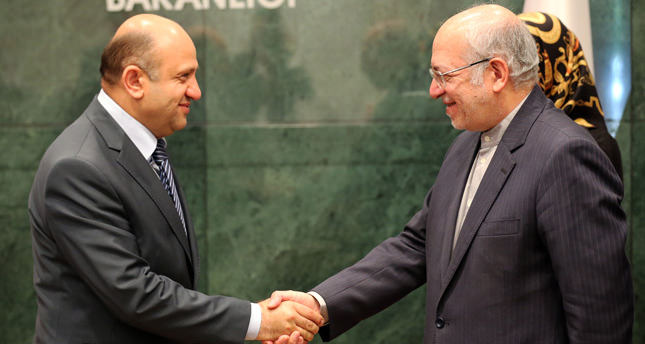 Iran and Turkey have exchanged several politico-economic delegations during the last few months to overcome trade setbacks between the two countries. Concordantly, Iranian Minister of Industry and Business Mohammad Reza Nematzadeh paid a visit to Turkish trade and industry ministers on Aug. 8 within the ongoing talks aiming to boost bilateral trade between Iran and Turkey.

Turkish Minister of Science, Industry and Technology Fikri Işık welcomed Nematzadeh and his entourage at the Ministry. Işık said, "The cooperation between Turkey and Iran is inevitable to activate the potential that the Islamic world has. Turkey is against international embargoes imposed on Iran. We are aiming at boosting trade volume between the two countries to $30 billion [TL 64.81 billion] from $15 billion." He continued, "We attach great importance to the establishment of a common Organized Industrial Zone [OIZ] on the Turkey-Iran border. We have a high opinion of a win-win partnership for both parties. We have been resolved on the consolidation of bilateral economic relations. We can make joint production of aluminum, iron and steel."

Touching upon the presence of 750 organized industry zones (OIZs) in Iran, Nematzadeh noted that they visited OIZs in Ankara and they want to make use of Turkey's experiences through a common committee to be established. Iranian minister Nematzadeh also held a meeting with the Turkish Minister of Customs and Trade Hayati Yazıcı. Describing Turkey and Iran as big and friendly countries, Yazıcı highlighted the significance of relations between the two countries in terms of regional peace. Yazıcı stated, "Our primary objective is to make border crossings between Turkey and Iran render services in a modern and secure way. To this end, we have made considerable progress. However, what is more important than inking deals is to implement them. These visits will lend impetus to this."

During press conference with Yazıcı, Nematzadeh said that Turkey-Iran relations have historical ties and that they are further improved through these top-level visits.Saying that they are in Turkey to hold talks in the fields of economy, transportation, customs and trade, Nematzadeh continued, "Turkey and Iran are two big countries that have to take historical, sectarian and economic ties into consideration. The infrastructure that will allow the private sectors to work together has to be introduced."Referring to the preferential trade agreement between the two countries, Nematzadeh said, "When the agreement comes into effect, commercial relations between Turkey and Iran will be promoted and the obstacles to the representatives of the private sector will be handled."He added, "Due to heavy sanctions imposed on Iran in recent years, our commercial relations remained unsatisfactory. We hope it will reach the desired level soon."

According to a report by Iran's Fars News Agency published on July 6, the General Manager of Iran's Customs Authority Mesut Karbasiyon and Turkish Ambassador Ümit Yardım held an "emergency meeting" to address problems concerning commercial relations between the two countries. The first priority would be granting safe passage to Turkish trucks. The two also discussed speeding up the process of resolving these problems. A second issue, the most crucial and urgent issue Iran is facing is deemed the "long queues" Iranian drivers suffer at the border entry points. The Turkish Ambassador noted that such problems resulted from the lack of facilities at both countries' borders and that current facilities are inadequate to meet the demands of the increasing trade between the two countries.

Turkish Prime Minister Recep Tayyip Erdoğan and a high-ranking politicaleconomic delegation made a visit to Tehran in January. During the visit, Erdoğan underlined his country's enthusiasm for starting a new chapter in the relations with Tehran and said Turkey is in dire need of Iran's energy resources. "We import oil and natural gas from Iran and those are strategic products that Turkey imports from Iran and we have been importing them more [than before]," Erdoğan told reporters in Tehran after inking several documents on cooperation with Iran. "Given the fact that Turkey's industries are making progress on a daily basis and rapidly, we direly need energy products, especially Iran's natural gas, and we should take joint win-win steps," he added.
Last Update: Aug 09, 2014 1:50 pm
RELATED TOPICS