Economy should be top of agenda, top businessmen say 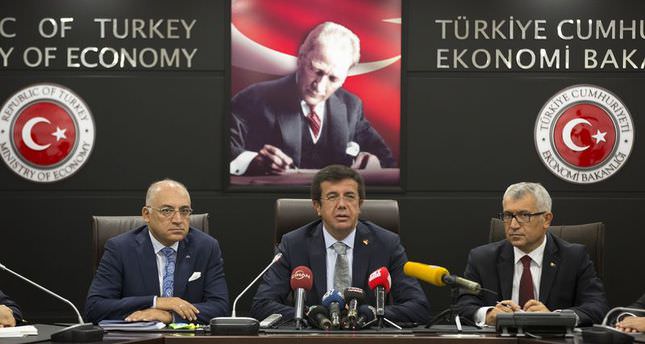 by Daily Sabah Aug 11, 2014 12:00 am
Turkey's 12th president was elected yesterday. Turkish President Recep Tayyip Erdoğan, who according to the temporary results received 51.8 percent of the votes, received many congratulatory messages from the business world. "Economic stability" and "elimination of polarization within the society" were the main themes of the messages. The business world underlined that Turkey's new focus should be the economy.

The first messages were received from the exporters. The Turkish Exporters' Assembly (TİM) issued a written declaration during the announcement of the election results. TİM Chairman Mehmet Büyükekşi stated that Turkey has finalized the presidential election with maturity and self-sufficiency, which will help improve the country's democracy. "The election to be completed in peace is a success on its own. We hereby would like to congratulate Turkey's first directly elected President Recep Tayyip Erdoğan."

TİM further noted that they believe the former prime minister's leadership and services in Turkey's political transformation and the country becoming a powerful global economic actor and an international trader will continue in the Presidential Palace. They also stated that such success will continue and Turkey will reach the targets it has set for 2023. "We wish him success in his new post," concluded the message.

Head of the Independent Industrialists' and Businessmen's Association (MÜSİAD) Nail Olpak also commented on the presidential election. In his written statement Olpak noted that the nation has selected its president and impressed its will for peace, security and stability in Turkey. "We hope Recep Tayyip Erdoğan will expand the trust the nation has in him during his presidential duty and improve the solidarity that has already been achieved in order to reach Turkey's targets in a quicker manner," said Olpak. He further noted that MÜSİAD was pleased that the elections were completed according to the good sense of the nation and added, "The nation has spoken. Now it's time to continue down the same road."
Chairman of the Istanbul Chamber of Commerce (İTO) İbrahim Çağlar stated that he hopes the results of the first presidential election by popular vote would be for the good of the whole country and the nation. "The elections to pan out as expected means economic and political stability will continue. Erdoğan has gained international trust in the Turkish business world and we believe he will have a greater contribution in his new position. The conclusion of the presidential election in the first round is highly fortunate for the business world ," said Çağlar and added that Turkey can now focus on the economy instead of politics.

The Turkish Industrialists' and Businessmen's Association (TÜSİAD) focused on the importance of eliminating polarization, which has become an obstacle for democratization and development. The message read: "We would like to congratulate our first directly elected President Recep Tayyip Erdoğan and wish him luck in his new post. We hope that our new president will establish collaboration and harmony, which has suffered lately between state institutions, with the power vested in him by the Constitution. We hope he acts as an advisor and peacemaker for an open dialogue to start between political parties."