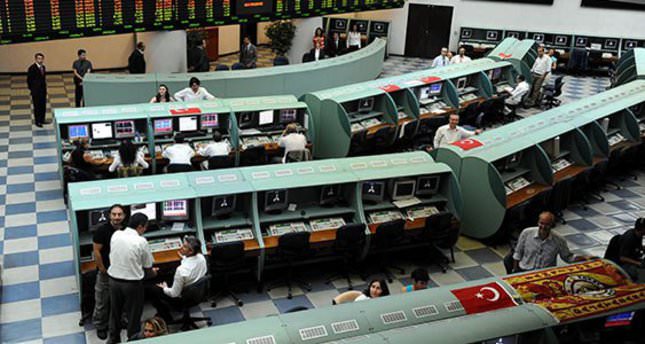 by Daily Sabah Aug 15, 2014 12:00 am
Turkey's current account deficit decreased 35 percent to $24.1 billion (TL 51.81 billion) in the period between January and June, the country's central bank said Thursday. The bank said the decrease was due mainly to an $11.26 billion dorp in the country´s foreign trade deficit, compared to the same period last year and an almost $1 billion increase in its service sector. "This decrease is mainly accounted for by a decline of $11.27 billion in the foreign trade deficit, which recorded $29.32 billion, as well as an increase of $883 million in the services surplus, reaching $9.30 billion in the first six months," the bank said in a statement.

Tatiana Lysenko, a director at Standard & Poor's, praised the recovery of Turkey's current account (CA) deficit, largely attributed to a strong export performance, but warned the recovery might not be as strong as it seems. "Part of the improvement comes from the significant reduction in non-monetar y gold imports," she said. "The underlying improvement is therefore less significant than headline numbers would suggest. In our view, Turkey's large CA deficit remains a source of vulnerability."

Speaking to Daily Sabah, economist and President of Nişantaşı University Dr. Kerem Alkin viewed the CA deficit shrinking as a positive indicator ahead of new data released by a calendar of international rating agencies. "New statistics regarding the CA deficit proves that Turkey is capable of managing its deficit. However, it also gives bad signals for economic growth," Alkin said. Recalling the Turkish Minister of Economy Nihat Zeybekçi's latest remarks on the decrease in the industrial production, Alkin noted that narrowing domestic demand was one of the main drivers of the CA deficit shrinking in the first half of the year. "Turkey's industry imports intermediate goods to produce final goods. The more domestic demand narrows, the more the defecit shrinks," Alkin noted.

Alkin underscored that decreasing the foreign trade deficit in the first six month of 2014 had a positive effect on the narrowing of the CA deficit. "Turkey's exports have been on the rise for months.

However, unrest in Iraq, which used to be Turkey's second largest export market valued at more than $12 billion per year, caused a drastic decrease in exports to this country. The CA deficit statistics for June do not cover export losses in Iraq, which means Turkey may face larger CA deficits in the near future stemming from the decreasing exports to Iraq," Alkin remarked.

He also noted that he expects Turkey to grow 2.2 percent in the second quarter, while the first quarter growth rate was 4.3 percent according to formal data. "If Turkey happens to be faced with challenges in growing its economy, we will have to re-evaluate the deficit figures. The picture will be clear after the CA deficit figures for June are released," Alkin concluded.

Veteran economist Hikmet Baydar commented on the CA deficit figures released by the Turkish central bank on Thursday. Baydar noted that Turkey should find a way to shrink its deficit without gearing down industrial activities. "Turkey's industr y is dependent on intermediate goods imports.
Periodical decreases in the price of intermediate goods or currency rates may have a positive effect on the CA deficit. However, a sustainable narrowing in the CA deficit is only possible with the indigenous production of intermediate goods that the Turkish industry needs," Baydar said. He also noted that Turkey's energy imports have a great share in the CA deficit. "Turkey should establish nuclear plants as soon as possible to cut its energy cost which is a huge burden for the economy," Baydar concluded.
Last Update: Aug 15, 2014 1:47 am
RELATED TOPICS