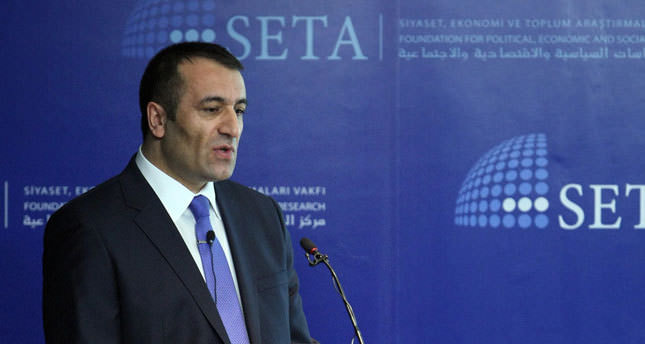 by Hazal Ateş Aug 18, 2014 12:00 am
Erdal Tanas Karagöl, director of Economic Studies at SETA, an Ankarabased think tank, said it is a difficult to eliminate the perception of rating agencies such as Fitch, Moody's and S&P toward Turkey. Claiming that these institutions cannot be called to account, Karagöl said, "Everybody waited for an explanation from Moody's before the presidential election on August 10. But it didn't. Markets were played before the election. People waited until late. We need to question their supposed good will. Their evaluations and analysis are not healthy."

Karagöl said that while the chaos inflicted by the Islamic State of Iraq and al-Sham (ISIS) still continues in Iraq, it is not possible to sell resources without Turkey. He emphasized that Turkey should not be seen as only a transit country where oil and natural gas are transported. "Turkey's Energy Exchange will contribute to marketing and pricing," he said, adding that both political and economic stability is necessary while carrying out the country's policies. Pointing out research and development studies and savings are significant for Turkey to reach its 2023 targets, Karagöl said, "We know the problems on the table and we are working to solve them." When he was asked whether economy administration was going to change, he answered, "I think there won't be big changes in economy administration but I cannot talk for sure."

Participating in a meeting in Mexico held by Mexico, Indonesia, South Korea, Turkey and Australia, Karagöl said cooperation in energy was necessary. "One liter of oil in Mexico is $1 [TL 2.18] while it is more than $2 in Turkey. If cooperation can be achieved in some fields, a decrease in Turkey's energy bill by nearly $10 to 20 billion can have a significant contribution to the country," he said.

He also stated that if Turkey can increase its $11,000 per capita income to the level of $12,000 to $12,500, thereafter per capita income could increase faster. "Interest rates are high, which affects long-term investments and big projects. High interest rates are important expenditure items. Investors should be relieved. Also, interest rates of bank credits are around 14 to 15 percent. Banks are getting the advantage of high interest rates,"
Karagöl said, adding that risk assessments of credit rating agencies put pressure on the Central Bank.
Last Update: Aug 18, 2014 2:17 am
RELATED TOPICS