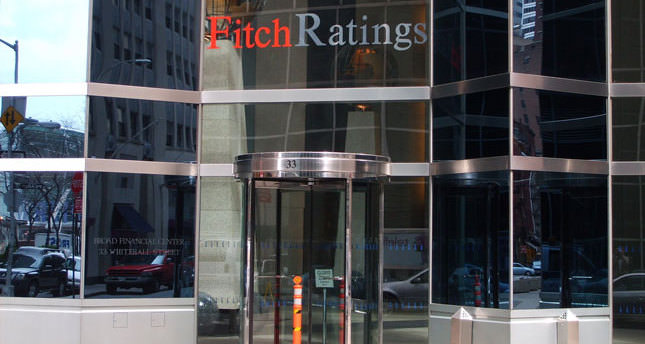 by Daily Sabah with AA Aug 20, 2014 12:00 am
Year end growth estimations for Turkey have been upgraded to 2.7 percent, Fitch Ratings Senior Director Janine Row said on Tuesday, pointing to the country's robust banking system and strong first-quarter growth performance. Speaking to Anadolu Agency, Row said that many international institutes-including the World Bank, Standard & Poor's and the OECD have upgraded their growth estimations for Turkey. "Fitch's expectations were revised up as well, but very modestly from 2.4 percent to 2.7 percent. Other agencies and other international financial institutions have increased the forecasts for growth for Turkey. And we saw that Q1 growth forecast was very strong [at] 4.3 percent," Row said. Row said that Turkey has a strong banking system, which can cope with financial shocks. "The capital positions of the banks are generally quite good.

That provides some buffers to withstand any shocks," Row said. Claiming that geopolitical strains in Turkey's region will continue to pose problems, Row said that an increase in savings and foreign direct investment could cushion volatility in economy. "We have repeatedly stated that Turkey is likely to be considerably more volatile than other BBB range countries and there is no timeline," Row said.

After this month's presidential election saw a victory for Prime Minister Recep Tayyip Erdogan, Fitch released a statement saying: "Turkey has been remarkably resilient to recent external shocks and banks and corporates continue to enjoy high roll-over rates, but we expect political risk to remain a credit weakness that could lead to a negative rating action if it adversely affects government effectiveness and policy predictability."

During an interview with Anadolu Agency, Tatiana Lysenko, director at Standard & Poor's (S&P) and senior economist responsible for macro-economic forecasting for Turkey said on Aug 14, "This year and in 2015, the Turkish economy will display relatively slower growth. Turkey's economic growth forecast for this year, which was projected as 2.4 percent in the report released in May, has been increased to 2.9 percent with a recent update, while it has been revised to 3 percent for 2015." U.K. bank Barclays raised its 2014 and 2015 growth forecast for Turkey on June 30 following the country's strong export growth and recovering consumer demand. Publishing an outlook report for emerging economies, Barclays said in its report that Turkey's growth was expected to accelerate starting from the second half of 2014. It said that the reason for the accelerated growth in the first quarter was because of strong exports which balanced stagnation in domestic demand.

Barclays also noted decreasing political instability, better foreign demand and the global environment for capital inflows could speed up Turkey's growth. Barclays raised Turkey's growth forecast for 2014 from 2.2 to 3.3 percent while raising it from 3.5 to 3.7 percent for 2015.
Last Update: Aug 20, 2014 1:54 am
RELATED TOPICS