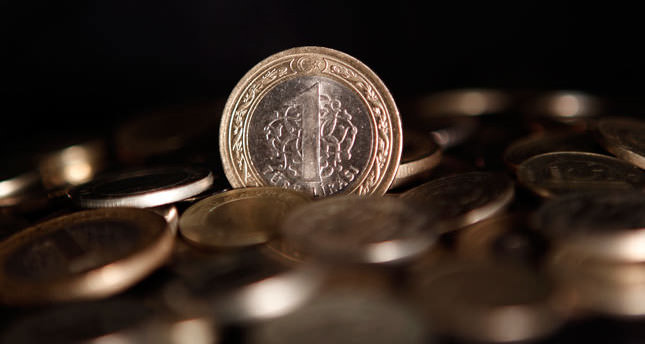 by Daily Sabah Aug 28, 2014 12:00 am
The Central Bank of the Republic of Turkey (CBRT) left its benchmark interest rate at 8.25 percent and kept the overnight borrowing rate at 7.5 percent until its next monetary policy meeting while lowering the overnight lending rate from 12 percent to 11.25 percent, according to a CBRT statement Wednesday. The CBRT's interest rate decision was closely observed by domestic and international markets amid expectations of a U.S. interest rate hike, a surge in the value of the U.S. dollar, and July's adverse inflation figures for Turkey. The CBRT's Monetary Policy Committee left the benchmark interest rate at 8.25 percent and once again stressed the bank's commitment to tighten its monetary policy until there is a meaningful improvement in inflation which has been above expectations for 2 months.

The committee's decision to leave rates on hold was widely expected since Turkey's statistics authority, TurkStat, on Aug. 4 reported that the Consumer Price Index rose to 9.32 in July, putting the annual inflation well above the CBRT's year-end forecast of 7.6 percent and even further beyond the five percent medium-term target. "Inflation expectations, pricing behavior and other factors that affect inflation will be closely monitored and the tight monetary policy stance will be maintained by keeping a flat yield curve until there is a significant improvement in the inflation outlook," said the statement released by the bank.

Speaking to Daily Sabah, economist Taha Meli Arvas noted that the announcement by the CBRT's Monetary Policy Committee to hold the repo rate at 8.25 percent was in line with markets' expectations, however currency markets apparently were caught off guard, with the lira jumping on the news. "The borrowing rate was also kept unchanged however the overnight lending rate was cut by 75 basis points to 11.25 percent. Largely symbolic, this rate cut was meant to signal future cuts, bringing the rate corridor lower, however, Turkey's agricultural sector is currently experiencing a serious drought, raising food prices and adding to inflation worries. Trepidation over the effects of the drought on inflation apparently forced the CBRT to keep rates steady. I believe rates will be cut by another 150 basis points by the end of the year and that the committee's move was a signal of more cuts to come should inflation begin to come down," Arvas noted.

Kerem Alkin, an economist and president of Nişantaşı University, said the CBRT's latest statement signals that both inflation and the current account deficit are serious concerns. "However, the bank is also aware of the fact that it has to take steps to cut production and financing costs that is why it lowered the overnight lending rate," he noted. Alkin further added that if the CBRT lowered the benchmark interest rate, it could boost inflation.
Interest rates are a topic of debate between the government and CBRT officials since Prime Minister Recep Tayyip Erdogan criticized the CBRT for maintaining high interest rates on May 26, calling it a "limiting factor" for economic growth.

The bank had raised rates sharply at the end of January to combat a record low fall in the Turkish lira amid an emerging markets sell-off and the political turmoil prior to the March 30 local elections. It has slashed the rates by 0.5 percent, 0.75 percent and 0.50 percent in its May, June and July meetings, respectively.
Last Update: Aug 28, 2014 1:35 am
RELATED TOPICS