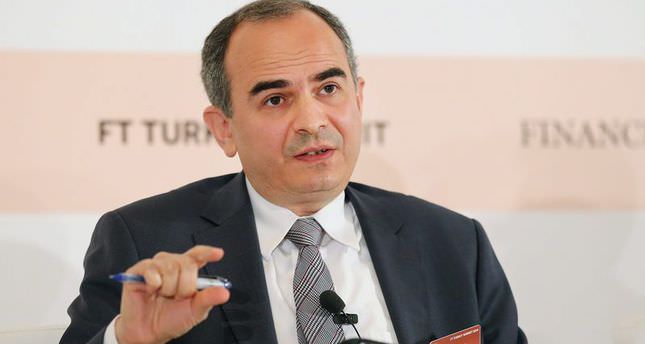 Analysts say that with its latest decision regarding interest rates, Turkey's central bank signals it will bring its monetary policies into conformity with the government's growth and employment targets

The Central Bank of the Republic of Turkey (CBRT) left its benchmark interest rate at 8.25 percent while lowering the overnight lending rate from 12 percent to 11.25 percent and kept the overnight borrowing rate at 7.5 percent until its next monetary policy meeting under the presidency of Governor Erdem Başçı, according to a CBRT statement Wednesday. The CBRT's interest rate decision was closely observed by markets amid expectations of a U.S. interest rate hike, a surge in the value of the U.S. dollar, and July's adverse inflation figures for Turkey. Analysts commented on what extent markets will be affected by the CBRT's latest decision.

Economist of Ziraat Yatırım Bora Tamer Yılmaz stated the recent decisions of the Monetary Policy Committee (MPC) would be welcomed and have a constructive effect on the credit rating agencies' opinions of the current state of the Turkish economy. Even though the MPC of the central bank decreased the overnight lending rate, analysts note that the CBRT is trying to achieve both the target interest rate and decrease inflation rates at the same time. Yılmaz noted that the fluctuating foreign exchange rates and high country risk premiums are not in line with the current monetary policy and as a result the MPC is maintaining the weekly repo rate, as any move in the rate may trigger an appreciation of the Turkish lira," Yılmaz added.
He further underlined that international credit rating agencies have reservations about the functioning of the CBRT due to recent interest rate cuts. "Maintaining the benchmark interest rate at the same level for a week would eliminate such concerns," noted Yılmaz and also added that inflation rates are much higher than the target 5 percent and the year-end forecast of 7.6 percent which is also looking unachievable. "The authorities not changing the weekly repo rates reveals that their main priority is establishing price stability," said Yılmaz.

Noting that the temporary inconsistency between inflation rates and monetary policy has now been eliminated, Yılmaz said, "It is possible that while inflation rates might increase due to the base effect from last year, the rates are expected to start decreasing after a three month delay in September." "If solid steps are taken towards price stability, then international credit rating agencies' opinions of Turkish economy might change for the better," said Yılmaz and added that the cost of borrowing to increase as a result of high inflation rates endanger financial stability and therefore, a monetary policy pressuring inflation rates aimed at establishing price stability might ensure that the current credit note of Turkey remains at the same level.

Odeabank's Economic Research and Strategic Planning Director Ali Kirali noted that decreasing the overnight lending rate was a better choice than decreasing the weekly repo rates. He further noted that the notification issued by the CBRT announcing the resolution with the MPC reveals that the central bank is more concerned about interest rates. "High food prices are delaying the improvement expected in inflation rates and it is the first time geopolitical risks have been mentioned in such a notification. While we believe that inflation rates will continue at a high level in August as well as stated in the CBRT's notification, provided that the central bank maintains a tight monetary policy, inflationist risks in the coming periods will be kept under control," said Kirali.

Burgan Yatırım's Chief Economist Haluk Bürümcekçi noted that maintaining the current interest rates indicates that there is no certainty about interest rates in the coming periods, which means the messages the CBRT will give until the next meeting are highly crucial. Noting that the degree to which interest rates will be lowered is of more importance, Bürümcekçi said, "In the latest surveys, the median expectation level was that the interest rate would be kept at the 8.25 percent level however, pricing in other markets [forward exchange rates, swap and secondary bond market] where interest rate expectations are also measurable point out that economists are not expecting the rates to fall to lower levels."
Last Update: Aug 29, 2014 2:01 am
RELATED TOPICS