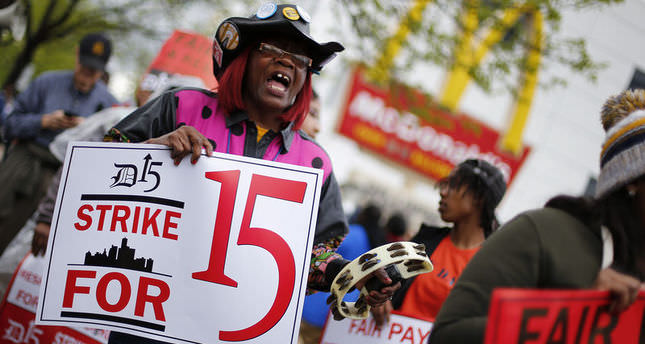 by Associated Press Sep 03, 2014 12:00 am
McDonald's, Wendy's and other fast-food restaurants are expected to be targeted with acts of civil disobedience that could lead to arrests Thursday as labor organizers escalate their campaign to unionize the industry's workers. Kendall Fells, an organizing director for Fast Food Forward, said workers in a couple of dozen cities were trained to peacefully engage in civil disobedience ahead of this week's planned protests.

Fells declined to say what exactly is in store for the protests in around 150 U.S. cities. But workers involved in the movement recently cited sitins as an example of strategies they could use to intensify their push for higher pay and unionization. Past protests have targeted a couple of restaurants in each city for a limited time, in many cases posing little disruption to operations. A spokesman for the Service Employees International Union, which has been spearheading the protests, said home health care aides will join the actions in some locations.

The "Fight for $15" campaign has gained national attention at a time when growing income disparities have become a hot political issue. President Barack Obama renewed his push for Congress to raise the minimum wage at a Labor Day appearance in Milwaukee. Many fast-food workers do not make much more than the federal minimum wage of $7.25 (TL 15.6) an hour. That equates to around $15,000 a year for 40 hours a week. But workers are often subject to unpredictable schedules and don't know how many hours they'll be given from week to week, since restaurants are careful to avoid paying overtime.

The fast-food campaign is designed to bring attention to such hardships, which few customers think about when buying burgers and fries, said Catherine Fisk, a professor of labor law at the University of California in Irvine.Over time, she said that could help "change the mindset" about fast-food jobs.