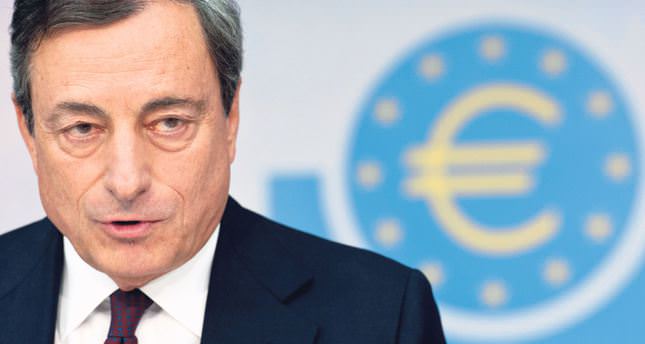 Eurozone business grew at the slowest rate this year in August and retail sales plummeted in July as escalating tension between Russia and Ukraine subdued spending and investment, experts say

SIGNS of slower growth, coupled with firms cutting prices at an even faster rate but still failing to drum up sales, will add to pressure on the European Central Bank ahead of its monetary policy meeting on Thursday. "The euro area is still just about expanding but the direction is downwards and the risk is we get more of the same as we move through the next few months as the geopolitical factors weigh heavily," said Ken Wattret at BNP Paribas. "It's pretty obvious the ECB is worried, and rightly so. The pressure will continue."

Optimism about the future among service firms, which dominate the bloc's economy, fell to its lowest level this year amid rising tension over Ukraine that triggered sanctions from the West and countermeasures from Russia. Although the Ukrainian president's press office said on Wednesday he had reached agreement with Russia's Vladimir Putin on a "permanent ceasefire" in eastern Ukraine's Donbass region, uncertainty about the situation on the ground remained. The Kremlin later said the presidents had agreed on steps towards peace but a ceasefire had not been agreed between Moscow and Kiev because Russia is not a party to the conflict.

World markets jumped after the initial declaration before trimming gains - Britain's top share index touched a 14-1/2-year high.Markit's Composite Purchasing Managers' Index (PMI), which is based on surveys of thousands of companies across the region and is seen as a good gauge of growth, fell to an eight-month low of 52.5, well below July's 53.8. That final reading was also weaker than a preliminary estimate of 52.8, although it was the 14th month above the 50 line that denotes growth.

The euro zone economy stalled in the second quarter and private sector growth in Germany, Europe's powerhouse, eased to a 10-month low in August. In France, the bloc's second-biggest economy, activity declined for a fourth month while business activity in Italy's service sector unexpectedly shrank for the first time in five months. In another sign of weakness, retail sales across the region fell 0.4 percent in July as expected, the first drop this year.

In Britain, the services industry expanded at the fastest pace in nearly a year last month, suggesting some companies were struggling to keep up with demand, a factor the Bank of England is likely to note as its ponders when to raise interest rates. While no change is expected at its Monetary Policy Committee meeting on Thursday, the BOE is widely touted to be the first major central bank to raise interest rates - although not until early next year. "The UK domestic economy continues to roar ahead," said Rob Wood, chief UK economist at Berenberg Bank. "A small 25 basis point hike in interest rates, when it comes - we expect February next year - is unlikely to have much effect on the pace of expansion."

Although a move upward in rates seems to be nearing from the BoE and the Federal Reserve in the United States - where an ISM services PMI due on Thursday is expected to show a slight slowing of growth - markets also are focussing on when the ECB will loosen policy. Speculation the ECB is preparing to buy assets spiked after bank President Mario Draghi said last month the bank was prepared to respond with all its available tools if inflation - which was just 0.3 percent in August - were to drop further.

The composite output price PMI, which has been sub-50 since April 2012, fell to a three-month low of 48.9 from July's 49.0 as firms cut prices to drum up trade. A Reuters poll of economists last week gave a median 75 percent chance the ECB will launch a quantitative easing programme by March, buying asset-backed securities in a bid to prevent deflation and jump-start economic growth. The euro zone PMI for the service industry fell to 53.1 from 54.2 in July, below a preliminary 53.5. The business expectations sub-index staged its biggest one-month fall since the tail end of the financial crisis.