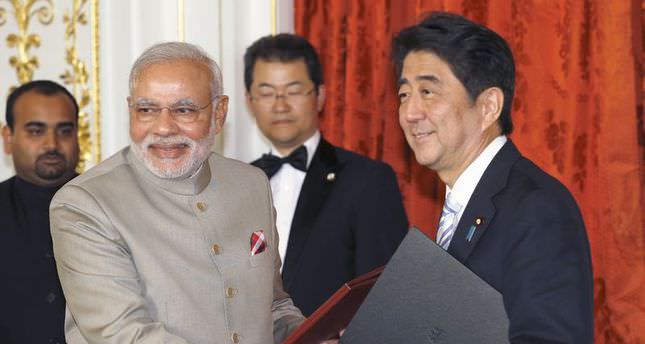 by Associated Press Sep 03, 2014 12:00 am
Indian Prime Minister Narendra Modi is wooing Japanese businesses with a promise of "red carpet" treatment rather than the bureaucratic red tape that India is notorious for. India is the best possible investment destination, offering "democracy, demography and demand" in its market of nearly 1.3 billion people, Modi told Japanese business leaders yesterday. "I have come to assure you that there is no red tape but red carpet in India. We have eased off lot of regulations," he said. Modi will wrap up his fiveday visit to Japan today, bringing home pledges of billions of dollars in aid and investment after the two governments agreed to beef up their economic and security ties.

The slew of agreements signed by Modi and Prime Minister Shinzo Abe did not include a nuclear energy pact India needs for imports of Japanese equipment to ramp up nuclear power. During his visit, Modi sidestepped questions from his audiences about China's rising influence, emphasizing instead values India shares with Japan, such as democracy. "Fighting darkness with a sword doesn't work," Modi said in response to a question about China at a gathering of students at Tokyo's University of the Sacred Heart. "India and Japan are both democracies. If we work together, we can only move in a positive direction."

In an address at Tokyo's stock exchange, Modi promised Japanese businesses that his three-month-old government would guarantee smooth sailing. He lauded agreements on selling defense-related equipment and cooperating in natural gas trading, solar energy and infrastructure projects including smart cities, high-speed railways, subways, airports and highways. Separately, Japanese wages unexpectedly logged their strongest increase since 1997, providing a boost to the government's battle against deflation. Labour cash earnings rose by 2.6 percent in July compared to a year ago, beating forecasts of a slowdown to 0.9 percent.