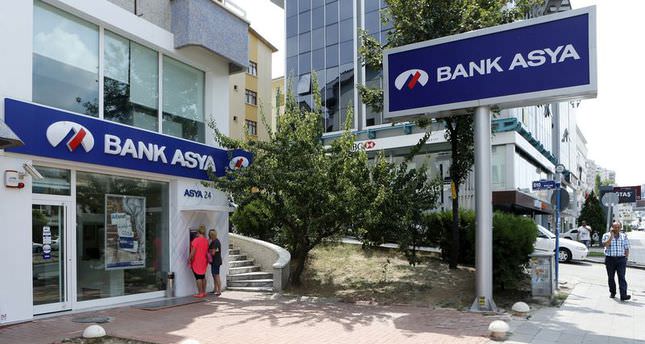 by Daily Sabah Sep 04, 2014 12:00 am
Alarm bells have started ringing for Asya Katılım Bankası (Bank Asya), which is known for its close ties to the Gülen Movement, has been put under the close supervision of the banking regulator.

The Gülen Movement was behind the Dec. 17 coup attempt to overthrow the government. The Banking Regulation and Supervision Agency (BDDK) has now included Bank Asya within the scope of Article 70 of the Banking Code since there has been a TL 5.8 billion capital outflow; the loans being followed up doubled, bad debts have reached 10 percent and Moody's have decreased the credit note of the bank

The article regulates the steps the BDDK needs to take if banks that are going through a financial crisis do not take the required measures or even if they do, their finances do not improve or if it is determined that they won't be able to improve their finances. If such measures applied and steps taken by the BDDK are not adequate, then Article 71 regulating banks to be transferred to the Saving Deposit Insurance Fund will be put into effect.
Economists say that the BDDK's latest move aims to save the bank from a possible bankruptcy.

The BDDK obliges the banks that are included under this Article to dismiss either part of, or all of the general managers, assistant general managers, including those on the board of directors, the directors of related departments and branches and to obtain the permission of the BDDK for those who will be assigned in their place. According to Article 70 of the Banking Code, the BDDK has the right to request the related banks to limit their operations or temporarily suspend them. It can also impose all other kinds of limitations and restrictions including collecting and utilizing the resources and all kinds of maturity date and interest rate limitations. The BDDK may request from such banks to not exceed the deposit or participation funds that are subject to insurance and to cover the required reserves for long-term loans from the share certificates of controlling shareholders or from other assets. It may also request a sale of assets with low yield.

Paragraphs 6 and 7 of Article 70 underline that the shareholding structure of the banks might be changed. Accordingly, the BDDK may request a merger with one or more banks or to find more shareholders in order to increase equity. Bank Asya had announced that they will start discussions with a Qatari bank regarding becoming partners in order to stop the cash outflow and the declining value of its share certificates on March 25. The reason for the 53 percent rise in the price of Bank Aysa's share certificates over three days was due to this announcement. The drop in value on the stock exchange came from the Qatari bank's one-month-late withdrawal from the deal. The cessation of unofficial discussions with the state-owned Ziraat Bank have also put the bank's future in danger.