Switzerland's economy most competitive once again 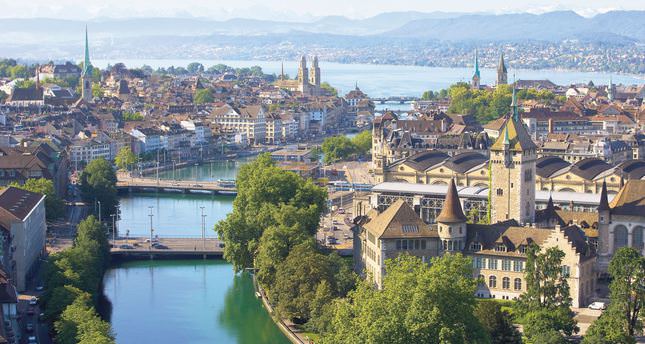 The United States' competitiveness among global economies has risen to the No. 3 spot behind Switzerland and Singapore in rankings published annually by the World Economic Forum

The European Union is becoming more competitive but Switzerland, Singapore and the United States are the three economies to beat, while Turkey dropped one notch from 44th, an annual survey by the World Economic Forum said yesterday. The Global Competitiveness Report published by the Geneva-based body, which is most famous for gathering politicians and billionaires for an annual exchange of views at the Alpine resort of Davos, showed the same 10 countries filling the top 10 spots for at least the third year running. Switzerland's slick efficiency, innovation and macroeconomic stability kept it on top for a sixth year in a row, although it was marked down for the difficulty of finding qualified workers. "A potential threat to Switzerland's competitive edge might be the increasing difficulties faced by businesses and research institutions in finding the talent they need to preserve their outstanding capacity to innovate," the report said.

The United States muscled into third place ahead of Finland and Germany, while Japan leapfrogged Hong Kong and the Netherlands to take sixth spot. EU states such as Romania, Portugal and Latvia were among those rising up the ranks of competitiveness. Greece, which is still bringing up the rear for the EU, in 81st place globally, jumped 10 places up the rankings from 91st last year. Greece was helped by improvements in its goods and labour markets and a sharply reduced budget deficit, which improved the outlook despite still very high levels of government debt. "All this suggests that the implemented reforms are starting to pay off," the report said. China climbed one rank to 28th, Russia jumped 11 to 53rd spot, while India slid 11 to 71st and became the least competitive BRIC economy, 14 places behind Brazil. Bottom-ranked this year was Guinea, lately in the news for being the source of the world's most deadly Ebola outbreak.

The Forum bases its assessment on a dozen drivers of competitiveness, including institutions, infrastructure, health and education, market size and the macroeconomic environment. The report also factors in a survey among business leaders, assessing government efficiency and transparency.
India has been sliding down the rankings since 2009, let down by basic healthcare and education, red tape, high business taxes, poor technology and a rigid labour market.

Russia's new-found competitive edge was sharpened by improvements to domestic competition and business sophistication that came befornoe the Ukraine conflict.Reverberations from that conflict - sanctions and the impact on the gas trade, with knock-on effects on public funding -could blunt it again in the future, the survey said.

A major brake on competitiveness for many advanced economies, including the United States, Japan and many EU countries, was doubt about their macroeconomic environments. In that category, the United States was ranked 113th worldwide, slightly better than 117th last year. The leaders in macroeconomic stability were Norway and Qatar, both blessed with energy bonanzas that have pushed GDP above $100,000 per head.