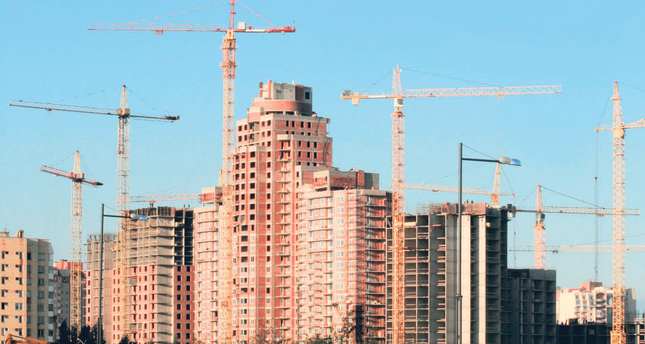 Speaking to Anadolu Agency (AA) on the latest developments in the real estate sector, Ağaoğlu said that it is one of the most dynamic and prominent sectors in Turkey and creates a multiplier effect. He added that there has been a 9 percent drop in sales in the first six months of this year when compared to last year. Stating that in order to analyze the actual situation, the circumstances should be observed on a project basis and that there are no problem observed in projects with the right location and price, Ağaoğlu noted that the decline in property sales was mostly due to the recent political agenda and after the general elections in 2015, the sector will be able to progress more rapidly.

Ağaoğlu stated that current properties in mainly Istanbul and other cities are in a very bad shape and added: "In Istanbul, which is under the threat of earthquake, 50 percent of the people live in coffin-like houses. I don't want to scare anyone, but this is the reality.

In a country with such dwelling stock, there wouldn'tbe any decline in demand." Now that the elections are over, in the second half of the year, Ağaoğlu said that he is expecting an increase and even now there is more activity in the construction sector.

Ağaoğlu said that the coup attempts led by U.S.-based shadowy imam Fethullah Gülen and his followers on Dec. 17 and Dec. 25 were unfortunate for the construction sector and added that there are two driving forces behind the economy: finance and the construction sector. Ağaoğlu said: "The finance sector learned its lesson in the 2001 financial crisis. The Banking Regulation and Supervision Agency (BBDK) now has a strong hold on banks and the finance sector. The Dec. 17 and 25 coup attempts were aimed at disrupting the economy. In the past, economic crises were triggered to get rid of certain governments.

There is no way to overthrow a government that has been ruling the country for the past 12 years, but to disrupt a good economy. They tried to discredit both the construction and the finance sectors. Unfortunately, they even drew our name into it. This period was really unfortunate for Turkey." He further noted that the state has never backed the construction industry and has never given any incentives to the sector. "The sector has created its own resources.

The tax burden of the sector is pretty heavy as well. The government relies on the taxes it receives from the construction sector when reconciling the budget," said Ağaoğlu.Ağaoğlu underlined that as a former businessman, he said industry needs to be supported with incentives from the government, and it is healthy for Turkey to grow with the development of the construction and industry sectors.

He further noted that talk that there is an oversupply in the sector is not correct and over supply only happens with either an increase in prices or a decline in demand. "The demand in Turkey is still extremely high.Further, there is foreign demand as well.Therefore, there are no problems in production, demand or price, and therefore, there is no oversupply in the sector," said Ağaoğlu.

Noting that sales to foreigners directly indicate how developed a country is and now in London, sales to foreigners has increased to 16 percent, and this is not damaging to the country. Ağaoğlu stated that many countries that want to become more developed try to increase their sales to foreigners and the reciprocity law is one of the most important laws ever passed in Turkey He further noted that they have invested about $1.5 billion in the Gulf area and have created important foreign exchange resources for the government. Stating that the construction sector uses only local resources and creates value, Ağaoğlu added that while sales to foreigners is a good recourse for the country, there is lots of speculation. "Such attempts should be prevented by promoting Istanbul. The law of reciprocity still has some deficiencies that need to be improved immediately," said Ağaoğlu.