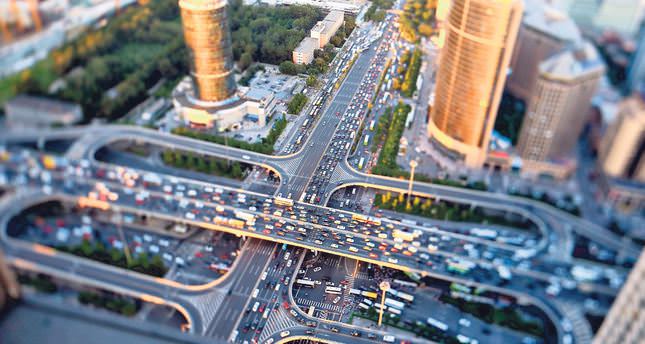 As Japan's economy contracted at a rate of 7.1 percent, China's trade surplus surged 77.8 percent yearon- year to beat the previous all-time high of $47.3 billion set in July and imports saw a surprising fall

China's trade surplus surged to a record $49.8 billion (TL 107.6 billion) in August, figures showed yesterday, as imports saw a surprising fall and export growth slowed in a further sign of softness in the world's second-largest economy. The mixed bag of data from the General Administration of Customs follows a string of figures showing a continuing weakness in the economy, fanning expectations the government will unveil new measures to boost growth. Imports declined 2.4 percent yearon- year to $158.6 billion, while exports increased 9.4 percent to $208.5 billion. The drop in imports was greater than July's 1.6 percent fall and missed the median forecast of a 2.7 percent increase in a Wall Street Journal survey. Exports beat estimates of a 9.2 percent increase but were still well down from the 14.5 percent rise seen in the previous month. As a result, the surplus surged 77.8 percent year-on-year to beat the previous all-time high of $47.3 billion set in July and easily passed the median forecast of $42 billion. The news will do little to ease worries about the economy after a recent batch of disappointing data as a series of ministimulus measures have failed to kick-start growth. Last week two closely watched indexes indicated that expansion in manufacturing activity slowed in August. And in July, bank lending plunged while growth in key measurements such as industrial production, retail sales and fixed-asset investment lost momentum from the previous month. Analysts say China's outlook is being damaged by trouble in its huge property sector - where new home prices in August saw their fourth consecutive month-onmonth decline - and the waning effect of stimulus measures taken earlier this year.

Elsewhere, Japan's economy shrank more sharply in the second quarter than first estimated and the latest indicators suggest only a modest bounce back since then. The world's third-largest economy contracted at an annualized rate of 7.1 percent in the April-June quarter, according to updated government figures yesterday. The initial estimate released earlier this month said the economy contracted 6.8 percent. Business investment fell more than twice as much as first estimated. The economy's contraction was expected after Japan increased its sales tax from 5 percent to 8 percent on April 1.

So far, data for the current July-September quarter suggest any rebound in growth is likely to be modest and slow in materializing.

A government survey of "economy watchers" released yesterday showed confidence in the economy's prospects deteriorated in August. Business activity surged early in the year, with the economy growing 6 percent in January-March, as consumers and businesses stepped up purchases to avoid paying more tax. Prime Minister Shinzo Abe has championed an aggressive stimulus program aimed at ending chronic deflation that has discouraged corporate investment and dragged on growth. A sustainable recovery will require strong corporate and private spending, since exports and public spending have so far done little to lift growth. Abe will be watching data from the current quarter as he decides later in the year whether to go ahead with a further 2 point increase in the sales tax to 10 percent in 2015. Surveys show the public opposes a further tax increase, though increases are needed to counter ballooning public debt, which now is more than twice the size of the economy. The revised data show business investment fell more than twice as much as estimated before, or 5.1 percent, while private residential spending sank 10.4 percent in annual terms. The survey of economy watches, a grassroots assortment of service industry workers and others thought to have a good real-time sense of business activity, was at 47.4 in August, down from 51.3 in July and the first drop in five months.