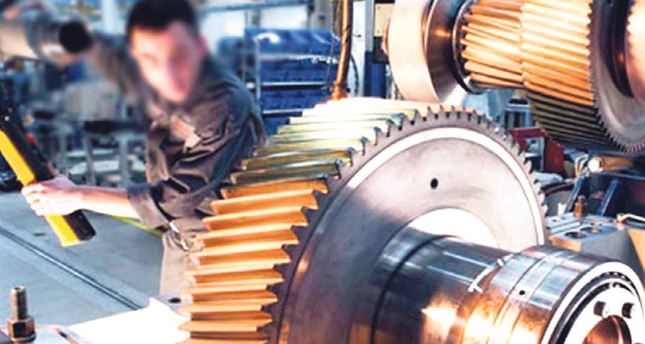 The manufacturing industry and electricity, gas, steam and air conditioning supplies made the largest contribution to industrial production in July - something experts said was a result of favorable weather conditions and demand for Turkish products from foreign countries. Mining and quarrying output, however, fell by two percent. In the first quarter, Turkey's economy grew by 4.3 percent, but it is expected to see a slowdown in the second quarter. Analysts predict that the country's economy grew by 2.8 percent in the second quarter of 2014, according to Anadolu Agency's (AA) 'Growth Expectation Survey' released on Friday. Monday's figures also indicated that calendar adjusted industrial production in the country increased by 3.6 percent compared with the same month last year.; Erdal Tanas Karagol, economy director at the Ankara-based non-profit SETA Foundation for Political, Economic and Social Research, says both the U.S. Fed's decision about an interest rate hike and the impact of the insurgency in Iraq on oil prices were factors causing concerns among Turkish business circles.

A financial analyst from Destek Securities, Eren Can Umut, says Turkey's 4.3 percent growth in the first quarter was an unexpected rise. "July saw an industrial increase because of the Turkish central bank's signal to cut its main interest rate further and that domestic demand in the country was better than expected," he said. He added that the European Central Bank's decisions would also have an impact on Turkish businesses in the forthcoming months. "Turkey's industrial production will increase in line with the foreign demand for its exports from eurozone countries," Umut said. Speaking on the matter, Minister of Science, Industry and Technology Fikri Isık highlighted that the latest data regarding industrial production proves Turkish industrialists' success amid an unstable business environment in neighboring countries. In his written statement posted online, Isık remarked that industrial production will support exports, which have been the main driver behind Turkey's growth since the beginning of the year. "The latest data shows that capital goods production increased in June, which signals considerable improvement in the investment climate," the minister said.
Economists participating in a growth expectation survey conducted by a Turkish think tank predicted a 3.1 percent growth in the second quarter of 2014. The growth of Turkey's economy for the second quarter is estimated to be 3.1 percent on average, according to 20 senior economists who participated in the Gross Domestic Production Growth Expectation Survey conducted by SETA.

The survey shows that the highest growth expectation stood at 3.7 percent while the most pessimistic forecast was 2.2 percent. Both figures are less than the four percent growth target set by the government.