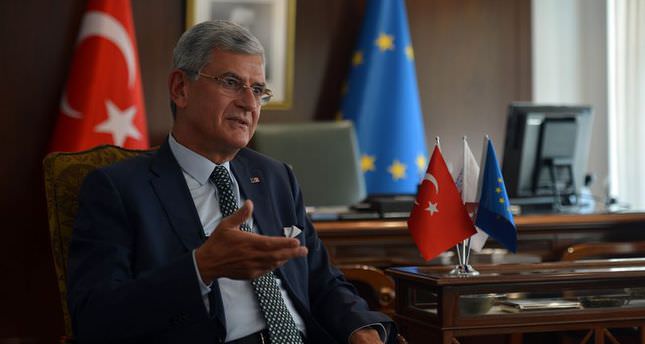 by AA Sep 09, 2014 12:00 am
Turkey's top diplomat responsible for EU affairs has said that EU citizens will be knocking on Turkey's door for job opportunities after a visa-free travel procedure is complete.

Volkan Bozkır's comments on Monday came after he received Ankara Chambers of Industry Head, Nurettin Özdemir, at the ministry headquarters in Ankara.

Hailing Turkey's progress over the last 50 years, he said: "The EU will benefit from Turkey's potential.

"The era of Turkish citizens going abroad to find jobs is over."

The European Union Affairs Minister and chief negotiator for EU talks said Turkey should not be regarded by the EU as a country living under the standards of the 1960s.

He added, "after the visa-free procedure with the EU is complete, I can see that Turkey will have to close some doors to excessive labor migration from the EU countries."

Meanwhile, Özdemir said that although Turkey had a customs union agreement, the country was not in the Trans-Atlantic Trade and Investment Partnership (TTIP) and this had hurt Turkish investors.

The proposed TTIP free-trade agreement between the U.S. and EU does not include Turkey and its supporters claim it will increase economic growth by removing trade barriers in various sectors.

Bozkır underscored that Turkey had signed a customs union agreement to stop illegal migration and to initiate a visa-free procedure and would act accordingly to its plan.

Turkey has started to review the Customs Union Agreement that came into force on Dec. 31, 1995.

Turkey is the only non-EU country which has such an agreement, which was a keystone to prospective EU membership for the nation.
Bozkır also received Ambassador Stefano Manservisi, the head of the European Union Delegation to Turkey during the day, and hailed the importance of Manservisi's duty, saying the two diplomats would work towards building new strategies for Turkey's EU membership bid.

Bozkır will pay official visits to Strasbourg and Brussels next week and will meet with European Commissioner for Enlargement and European Neighbourhood Policy Stefan Füle to discuss Turkey's EU progress report for 2014.

The report will be published on Oct. 8.