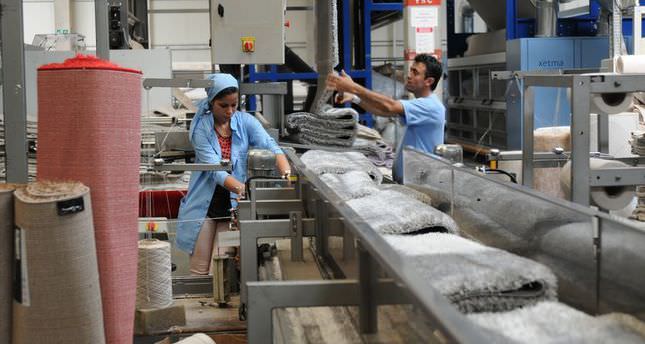 by AA Sep 10, 2014 12:00 am
Gaziantep is the number one machine-woven carpet production center in the world, statistics suggest.In the first eight months of the year, carpet sellers export figures reached $1 billion (TL 2.20 billion), and the figure is expected to reach $1.7 billion by the end of the year. The manufacturers' share in regional exports is the highest with 18 percent seeing carpets sold to various countries around the world, Saudi Arabia being number one. The city has now become the center of the carpet business accounting for 57 percent of world production. Speaking to Anadolu Agency, South Eastern Anatolia Carpet Exporters Union chairman Selahattin Kaplan said that 300-million-square-meters of carpet are woven each year. "Exports in the first six months of the year increased by 5.4 percent when compared to the same period last year, but the figures are below our expectations," said Kaplan.

Problems observed in Iraq, Ukraine and Libya also affect them, but relative normalization also increased last month's figures. Kaplan stated that even Egypt and Belgium, which used to be highly active in carpet production, have lost the market, and the closest competitor of Turkey only meets 10 percent of the demand in the world. "We control carpet production in the world, and we are very quick at producing new collections.

Other countries can create collections in a year, whereas we create a new collection within three months," said Kaplan. He further noted that they
reach 127 countries.