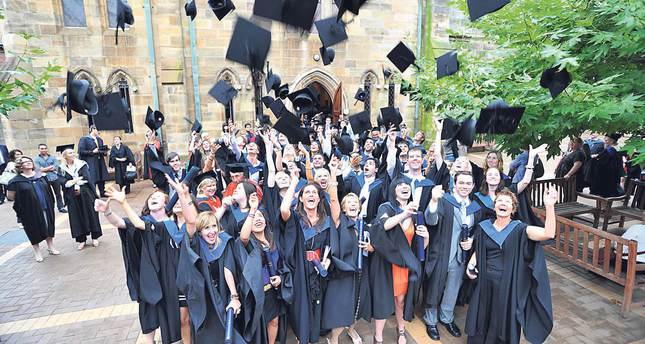 An overseas student would need $42,000 per year to cover school fees in Australia. The research report by HSBC, which surveyed 15 countries, shows Turkey is relatively affordable compared to other countries

Ranking the countries it examined from most expensive for international students to the least expensive, the study found that Australia ranked first ahead of Singapore in second and the United States in third, followed by the U.K., Hong Kong, Canada, France, Malaysia, Indonesia, Brazil, Taiwan, Turkey, China and Mexico with India being the cheapest. The report surveyed 15 countries, and found that an overseas student would need $42,000 per year to study in Australia. This was nearly $3,000 more than in Singapore and $36,000 more than a student heading to India would need.

Despite the high cost, the United States was regarded as offering the highest quality of education, followed by the U.K. and Germany with Australia only ranked fourth. "The key reasons to send children overseas are the acquisition of foreign languages, international experience and independence," said Simon Williams, HSBC's head of wealth management. "But an international education brings an extra dimension of complexity to planning, particularly financial planning. The majority of overseas education is privately funded by parents, and while the concept of a college fund is wellestablished in the U.S., it is still the exception elsewhere." The report, "The Value of Education," indicated that of the nearly 5,000 parents questioned, 89 percent wanted their children to go to university and 74 percent would consider sending them abroad. Indonesians were keenest on an overseas education (89 percent), followed by Malaysia, Turkey and Hong Kong. More than half of those questioned said that paying for their child's education was the best investment they could make, with many - led by Malaysia and China - wishing they had started saving sooner. The study found that Singaporeans were the most positive about the quality of their own education system. However, just six percent of Brazilian and nine percent of French parents believe the quality of education is better at home than abroad. In Turkey, tuition fees vary according to whether the university is private or publicly funded, its location and the study track chosen. According to Study in Turkey, state university semester fees may be as little as $300, while tuition fees at private universities can reach tens of thousands.

Private universities' fees are more expensive than state institutions', and postgraduate study is more expensive than undergraduate study. At the beginning of each academic year, the government sets tuition fees for higher educational degree programs, and the tuition fees for international students vary depending on the nature of the program. For undergraduate programs in state universities where the medium of instruction is Turkish, Turkish nationals pay $80-250 and foreign nationals $240-750.

Universities where the medium of instruction is English, the prices are between $150-500 for Turkish nationals and $450-1,500 for foreign nationals. In private universities, prices vary from $5,000-20,000. Students from Turkic republics and certain designated countries (Azerbaijan, Bashkortostan, Bosnia and Herzegovina, Dagestan, Karachay-Cherkessia, Kazakhstan, Kyrgyzstan, Macedonia, Mongolia, Moldova, Nakhchivan, Uzbekistan, Tajikistan, Tatarstan, Turkmenistan and Ukraine) pay the same amount as Turkish nationals at public universities.