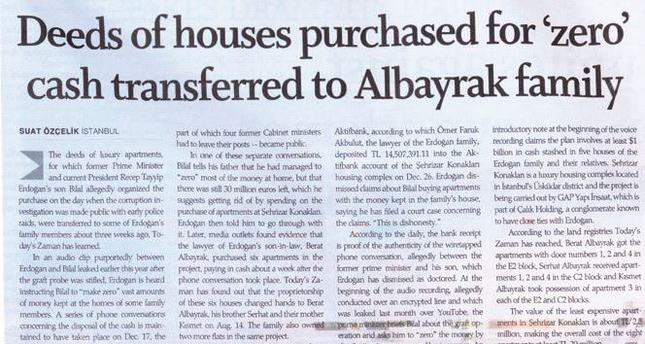 Known to be strongly related to the Gülenist Movement, that masterminded the Dec. 17 and Dec. 25 coup attempts to overthrow Turkey's ruling AK Party, the Zaman newspaper incessantly continues to publish fabricated news as part of their defamation campaign. On Wednesday, Turkuvaz Media Group Vice Chairman Serhat Albayrak and his brother Berat Albayrak were the targets of entirely inaccurate assertions made by Zaman and the English language daily Today's Zaman. The news reported that Ömer Faruk Akbulut handed down houses he had purchased in December 2013 to the Albayrak brothers in August. Albayrak's solicitor Fatih Savas said, "My clients bought the property with their own financial sources in October 2013. In contrast to the fabricated news, there is no association between Berat and Serhat Albayrak and Akbulut's property, which can be clearly seen in the deed."

The article was also on Zaman's official website "www.zaman.com.tr." On the same day, Today's Zaman released a similar article in English titled "Albayrak family gets deeds of houses bought to zero cash" in its first and fifth pages, along with a copy of the article published on its website, todayszaman.com.

Savas stated, "The published news contains inaccurate and fabricated allegations which misguide public opinion and damage the personal reputations of Mr. Serhat Albayrak and Mr. Berat Albayrak. They already paid for the property built by GAP Construction with their own financial sources in October 2013." He further said Serhat and Berat Albayrak do not have power of attorney over Akbulut's property, which has been mentioned many times before. As stated in the above-mentioned newspapers, Akbulut purchased the house in December 2013. "It is therefore clear that my clients bought the property before the claimed date, suggesting the news contents the Zaman and Today's Zaman articles consist of lies and are fabricated.

My clients did not buy any property from Akbulut. Previously, these newspapers had to publish a number of refutations to the fabricated news about my clients, however they still go on to do the same thing. We leave this issue to the public's discretion. Necessary legal procedures commenced against Zaman and Today's Zaman and will be closely followed," Savas said.

ÇALIK Holding incorporating subsidiary GAP Construction, who built the Sehrizar Homes, recently released an official statement regarding the two newspapers' misleading news as follows: "The allegations about Mr. Serhat Albayrak and Berat Albayrak and contractor GAP Construction are inaccurate, misguide public opinion and damage the personal and corporate reputations of the names mentioned above. Serhat and Berat Albayrak, who had successful senior executive careers at different companies of Çalık Holding for many years, voluntarily resigned from the corporation toward the end of December 2013. They already paid for the property from Sehrizar Homes in Oct.2013. We kindly bring the information to the attention of public opinion."