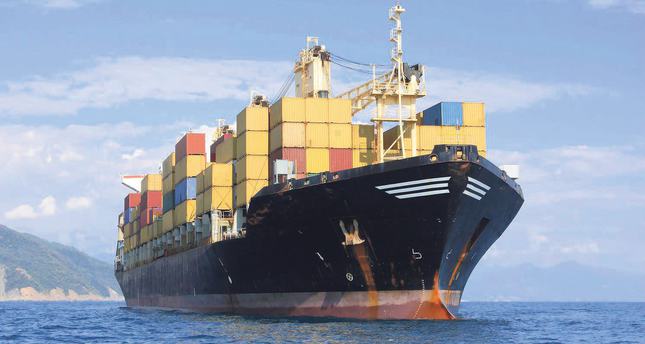 Turkey's current account deficit decreased by $16.5 billion to $26.7 billion between January to July, the country's central bank said Thursday. The bank said the decrease was mainly due to a $14.67 billion decrease in the country's foreign trade deficit compared to the same period last year, and an over $1 billion increase in its service sector. "This decrease is mainly accounted for thanks to a decline of $14.76 billion in the foreign trade deficit, as well as to an increase of $1.163 billion in the services surplus," the bank said in a statement.

For the first seven months of 2014, the foreign trade deficit stands at $34.27 billion while services surplus amounts to $12.26 billion. The country's current account deficit in July decreased sharply to $2.63 billion in July from $4.1 billion in June. Turkey's total exports stood at $93.5 billion in the first seven months of this year, while its imports amounted to $139.61 billion. Turkey's growth rate was 4.3 percent in the first quarter of 2014 and slowed in the second quarter with 2.1 percent.

Speaking on the matter, Minister of Economy Nihat Zeybekçi stated that growth figures lower than five percent would cause Turkey to miss its targets; therefore, the growth rate should be higher than five percent. According to the figures announced earlier this week, Zeybekçi said exports have contributed 2.9 percent to growth. He noted that the figures indicated that the domestic market has shrunk.

Zeybekçi further stated that Turkey needs to transfer more foreign capital and draw more foreign investors. "No one should have negative expectations from this and the following period in terms of economy. In Turkey, the ratio of public debt to national income is better than 25 EU countries and the capital adequacy ratio is better than 21 EU countries," said Zeybekçi.

Underscoring the fact that the current account deficit has decreased to seven percent from around 10 percent, and as of the end of 2014, it should further decrease to 5.5 percent, Zeybekçi added, "We are expecting a 35 percent decline in the current account deficit compared to the figure in 2013, and we are planning reach that target by creating the lowest unemployment rates."

Speaking at an event in Turkey's Black Sea province of Kastamonu, Turkey's Central Bank Governor Erdem Basçı stated that Turkey's share in global exports is increasing, which is facilitating growth and stabilization in return. "The Central Bank of Turkey should support exports through rediscount credits. Inflation rates are expected to drop after the effect of the surge in food prices is dissolved," said Basçı, and pointed out that tight monetary policies will continue to be applied until an apparent improvement is observed in inflation rates. "We are going through times that will be examined by the historians of future generals. Despite all adverse developments, Turkey's economy is relatively doing fine," noted Basçı, adding that despite the foreign trade deficit and the foreign geopolitical risks, there is an improvement in export-led growth.

Basçı further noted that apart from gold, there is increase in exports and there is relatively horizontal trend in imports. Therefore, the equalizing process is continuing as predicted. "As stated in the 10th development plan, Turkey aims to increase the savings ratio to 19 percent of gross domestic product. If we can achieve 19 percent, we may invest in larger amounts, and the current account deficit may drop to zero or hover at the lowest levels such as one or two percent. And the ratio of our investments to gross domestic product will become around 21 or 22 percent. Turkey's growth potential also rises safely. This is the key. Unless the savings increase in Turkey, we cannot find a permanent solution to our problems. How our savings will multiply is also important, as they need to increase every year. The public authorities pondered how to achieve this and they still ponder. We are open to new ideas," Basçı concluded.

International credit rating agency Fitch posted a statement focusing on Turkey's economic outlook. In the statement it is highlighted that Turkey's progress towards economic rebalancing may become more challenging for the remainder of 2014, despite the success of policy adjustments made earlier in the year. "Monetary policy settings have loosened since May, while the fragile eurozone recovery and heightened geopolitical risk could slow current account adjustment.

Recent data convey mixed messages on rebalancing. Compared to 2013, annual credit growth has virtually halved to 20 percent according to the Central Bank of the Republic of Turkey's (CBRT) preferred 13- week moving average metric. But the pace of decline has slowed, while further rate cuts could easily reverse the trend," Fitch said.