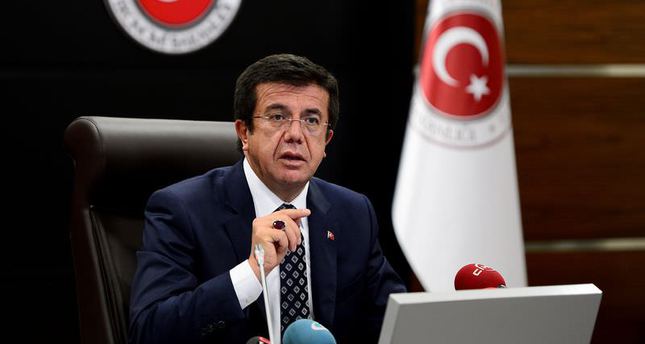 Speaking at a press conference on the recent growth figures and economic developments of Turkey, Minister of Economy Nihat Zeybekçi said that in the first half of the year global targets could not be reached and the general recovery was less than expected, but the slow recovery that started in Europe has positively affected Turkey's exports. Turkish Minister of Finance Mehmet Simsek, speaking on a TV program on Friday, also pointed out that current geopolitical tensions have reached their climax, which directly influences Turkey. "However, Turkey will continue to grow," Simsek said. Zeybekçi emphasized that according to the Medium-Term Program the growth rate was set at 4 percent and stated that many companies and enterprises had announced that they expected the growth rate to remain around 2 percent at the beginning of the year.

"But as time passed, the estimated growth rates rose up and our Ministry tried to demonstrate that Turkey is not one of the countries that can be evaluated from the outside. Turkey grew by 3.3 percent in the first half of the year and I believe it can perform higher than expected," said Zeybekci and added that domestic demand and economic performance in the last quarter will be critical.

Zeybekci further noted that they are scrutinizing the E.U.'s weak economic performance, political and economic problems in Russia, Syria, Iraq, Libya and Egypt, the global economic slowdown and the stagnation of American fund resources. "Maybe we won't be able to observe a rate over 4 percent however, we are now confident that growth will be higher than expected even if we cannot reach the 4 percent level. I still want to keep 4 percent as the target," said Zeybekci.

Zeybekci also noted that the ministry is trying to determine products that do not matter, even if they are not imported, and they realized that the figures they reached were high. "We want to focus on this part of our imports and insistently apply expenditure- reducing precautions. The Ministry of Customs and Trade, the Ministry of Science, Industry and Technology and the Ministry of Finance will implement strong measures by the end of this year," said Zeybekci.

Şimşek noted that the Medium-Term Program paid significant attention to increasing the volume of trade between the EU and Turkey; however the EU's performance progressed in a negative way. Şimşek further said the political uncertainty before the presidential and local elections created unfavorable results. Despite current developments, Turkey achieved 3.3 percent growth in the first half of this year. "We observed a slight slow-down in the second quarter. 'A more balanced growth' should be the key word for us. The current growth is modest, but needs to be more balanced and sustainable. It is really important," he continued. Turkey's financial growth is continuously fed by exports. Şimşek projects 4 percent growth this year, yet the current rates suggest the growth will presumably be between 3 and 4 percent. Despite the geopolitical risks, the development in the EU and obligatory monetary tightening at the beginning of this year, Şimşek expressed that Turkey has achieved considerable growth. In the first half of the year, the growth rate was 3.3 percent, while the total growth rate was between 3 to 4 percent.

Stating that inflation poses a serious problem, Şimşek said that Turkey has a serious inflation history. He emphasized that inflation had soared to three-digit figures in the past and that the current government has dropped it to a single-digit number. "Our goal is to decrease inflation to the lowest [reasonable] single-digit figure and we are far from that goal," Şimşek said. He stated that recently inflation went up seriously, exceeding 9 percent, due to the increase in food prices and currency impacts.

Şimşek continued, "It is impossible to achieve this with monetary tightening alone. The central bank did its share and applied a serious monetary tightening policy. As a result of this, the inflation will be brought under control once again and it will follow a downward trend. When you look at food prices of the last ten years, you will see that it [period] was much more volatile and higher. We need to make micro reforms. Therefore, we will soon establish a committee that will closely pursue inflation and carry out studies to take measures on the matter."
Last Update: Sep 13, 2014 1:37 am
RELATED TOPICS