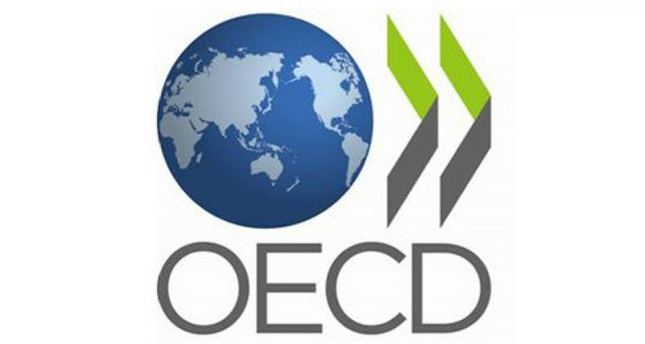 by Sep 15, 2014 12:00 am
The sickly Eurozone recovery is a drag on the outlook for the global economy, the OECD warned on Monday as it cut growth forecasts for most major advanced economies.

The sluggish recovery is also at risk from increased tension over conflicts in Ukraine and the Middle East, and uncertainty over the future of Scotland, the Organization for Economic Cooperation and Development said.

"Continued slow growth in the euro area is the most worrying feature of the projections," the OECD said, as it updated its forecasts for major economies.

It chopped by a third its 2014 forecast to 0.8 percent from the 1.2 percent expansion it had projected in May.

While it said the moderate US economic expansion remains broadly on track, the OECD cut the 2014 forecast by a fifth to 2.1 percent from 2.6 percent.

Japan's forecast was cut by a quarter, to 0.9 percent from 1.2 percent, although the OECD said it expected the underlying recovery in the economy to reassert itself following the dent to growth caused by an April sales tax increase.

Non-Eurozone Britain saw its forecast trimmed by 0.1 points to 3.1 percent.

The OECD did not provide an update to its forecast for global growth this year, which it forecast at 3.4 percent in May.

Among the major emerging economies which are not OECD members, China's forecast was held steady at 7.4 percent. The OECD said the world's number two economy "has so far managed to achieve an orderly growth slowdown to more sustainable rates."

It slashed the forecast to Brazil to 0.3 percent growth in 2014 from 1.8 percent after the country fell into recession in the first half of this year.

India was the sole gainer, with the OECD lifting its forecast to 5.7 percent from 4.9 percent thanks to a boost of confidence in the country that the new government will pursue growth-oriented reforms and progress in containing inflation.

Inflation is also a concern in the Eurozone, but in contrast to India, prices have been rising too slowly or have been falling.

"The possibility that euro area inflation will stay low and exacerbate weak demand is a key risk," said the OECD, calling for "more vigorous monetary stimulus".

The European Central Bank stepped up its support for the Eurozone economy at the start of September, lowering interest rates and announcing it would inject money into the economy by buying up asset-backed securities after Eurozone inflation touched 0.3 percent in August.

The Eurozone economy failed to grow at all in the second quarter, after posting an anaemic expansion of 0.2 percent in the first quarter.

"Excessively low inflation makes it more difficult to achieve the relative price adjustments that remain necessary to re-balance euro area demand without having to endure a prolonged period of slow growth and high unemployment," warned the OECD.

The OECD forecast of 0.8 percent growth is below the 0.9 percent forecast the ECB made at the beginning of the month.

In addition to conflicts and uncertainty over Scottish independence, the OECD also warned of the risk of US monetary policy tightening causing disruptive international financial flows and sharp exchange rate swings.

It also pointed out that "the bullishness of financial markets appears at odds with the intensification of several significant risks" and warned of the "possibility that risk is being mispriced and the attendant dangers of a sudden correction."

By contrast Britain saw its forecast raised by 0.1 points to 2.8 percent.

The OECD left its 2015 growth forecasts unchanged for China at 7.3 percent and 5.9 percent for India. It cut by 0.8 points the forecast for Brazil to 1.4 percent.