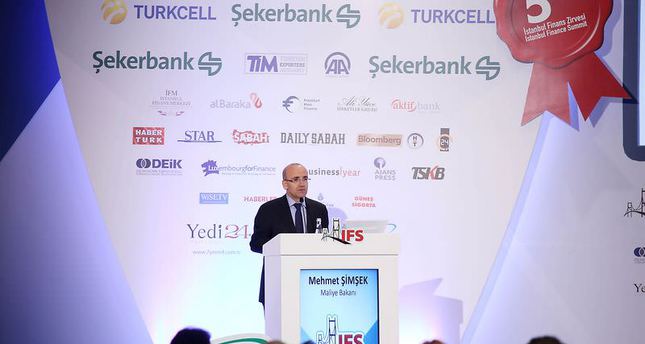 Regarding inflation rates, Minister Şimşek stated that the inflation rates almost reached its peak position, with the effect of food prices and inflationist pressure due to currency rates, and it is hoped to be downgraded to 5-7 percent level with a tight stance, and then to under 5 percent level in the middle and long term.

Şimşek pointed out that the high growth rates of 2010-2011 period were not sustainable due to pressure from increasing current account deficit and inflation rates, and that structural reforms should be made to achieve higher growth rates.

Şimşek noted that Turkey concluded local and presidential elections peacefully and political stability will continue to exist, while the support for AK Party and Recep Tayyip Erdoğan increased.

Reminding a recent poll's results showing 52 percent public support for AK Party conducted right after the foundation of the new cabinet, Şimşek said that the public opinion is clearly sided with stability and reform.

Şimşek also reminded that the parliamentary elections will be conducted in 2015 and noted that 25 transformation areas are being carried out with the Development Plan until the elections. As there would not be any elections, Şimşek said that the period between 2015 and 2019 would be a relatively calm one, and a period that second or third generation structural reforms would be carried out.

Pointing out Turkey's strong performance compared to European and developing economies in the post-crisis period, Şimşek said that Turkey is likely to stand amongst high income countries within a couple of years.

Regarding GDP growth rates, Şimşek stated his prediction between 3-4 percent level and noted the general downturn in global economy, turmoil in Middle East and Western sanctions against Russia as the most important obstacles, that would require next years' number to be revised.