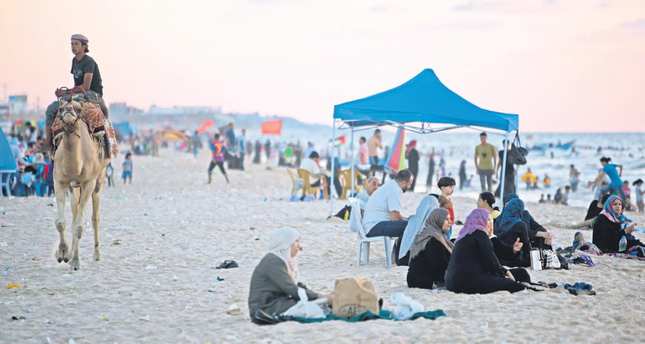 The World Bank issued a report ahead of a meeting next week of donor nations to the Palestinians on the sidelines of the U.N. General Assembly.
The bleak forecast is a "wake-up call to everyone" that the status quo, particularly in Gaza, cannot continue, Steen Lau Jorgensen, the bank's top official in the West Bank and Gaza, told The Associated Press. The bank predicts that the overall Palestinian economy will shrink by 4 percent this year, ending a period of growth driven largely by international aid that began in 2007. The downturn is expected to be sharpest in war-battered Gaza, with a projected drop of 15 percent, the bank said.

Gaza has been largely sealed off by Israel and Egypt since the Islamic militant Hamas seized the territory in 2007, wresting control from Western-backed Palestinian President Mahmoud Abbas. Since then, Israel and Hamas have engaged in three major rounds of conflict, including a 50-day war that ended in late August. More than 2,100 Palestinians were killed in the latest war, about three-fourths of them civilians, and more than 17,000 homes were destroyed or severely damaged, according to the United Nations. An international conference on raising funds for Gaza reconstruction is to be held Oct. 12 in Egypt, but the issue will also be the focus of a meeting next week in New York of representatives of key countries providing aid to the Palestinians. Palestinian officials estimate $6 billion (TL 13.2 billion) is needed for Gaza reconstruction.

The World Bank said a unified Palestinian government must run the West Bank and Gaza, and restrictions on trade and movement in and out of Gaza must be eased considerably if reconstruction is to be a success. Both seem remote possibilities. Hamas and Abbas agreed earlier this year to form a unity government of experts in the West Bank and Gaza under Abbas' leadership. But key disputes remain unresolved and the government has not begun working. Hamas appears unwilling to hand over power in Gaza, including control over the security forces, even though it agreed to the formation of the unity government, largely in hopes that this would offer a way out of a deepening financial crisis.

At the same time, it is unlikely Israel or Egypt will agree to ease restrictions on Gaza as long as Hamas remains the de facto ruler there. As part of the border blockade, Israel and Egypt bar virtually all exports from Gaza. Israel allows imports of most consumer goods, but severely restricts the influx of construction materials for fear they could be diverted by Hamas for military purposes, such as building attack tunnels. A network of such tunnels was uncovered and destroyed by Israel during the last Gaza war. Jorgensen, the World Bank official, said a unity government and an easing of restrictions are key to unlocking donor funds. "It's not clear that you would have substantial amounts ... of new money coming in if there is no unified governance framework," he said. He added that under Israel's restrictions on bringing construction materials into Gaza, it would take 18 years just to rebuild the homes destroyed in the last Gaza war and meet housing demand.

Even without the task of rebuilding Gaza, the Palestinian Authority, Abbas' self-rule government based in the West Bank, faces a funding shortfall of about $350 million in 2014, the bank said. The bank has repeatedly said that the Palestinian Authority can only reduce its dependence on foreign aid through economic growth which, in turn, has been hampered by continued Israeli restrictions on development.

According to the bank's projections, the West Bank economy is likely to stagnate this year, with about 0.5 percent growth, while the Gaza economy is expected to shrink by 15 percent. Jorgensen said that aid to the Palestinian Authority should continue as long as it keeps along the path of fiscal reform. "I think no one wants the Palestinian Authority to collapse," he said. "The humanitarian disaster would be so immense."
Last Update: Sep 17, 2014 1:56 pm
RELATED TOPICS