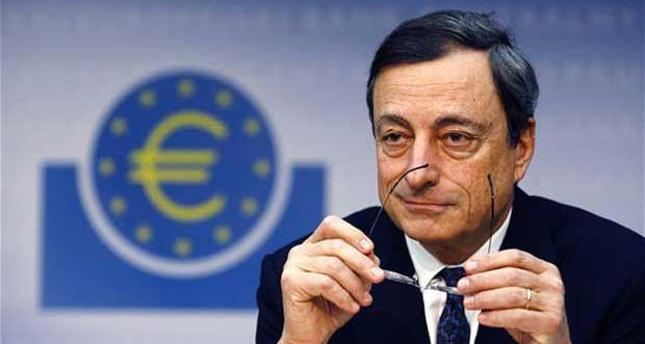 The European Central Bank will keep monetary policy loose for as long as it takes to push ultra-low inflation in the eurozone back up closer to the 2 percent level, its president, Mario Draghi, said on Wednesday

With data showing the single currency zone's economy having ground to a halt in the second quarter, the ECB president Mario Draghi told French radio that the ECB would do all in its power to stimulate growth but reaffirmed that Eurozone countries needed to make their economies fitter.

"Monetary policy will remain accommodative for a long time, and I can tell you that the (ECB) Governing Council is unanimous in committing itself to using the tools at its disposal to bring inflation back to just under 2 percent," Draghi, speaking through an interpreter, told Europe 1 radio.

Referring to signs of growth elsewhere in the world economy, he said ECB policy would remain accommodative even "while other countries' monetary policy may gradually acknowledge recovery is taking place."

Draghi has in recent days signaled the bank was ready to use additional unconventional tools to spur inflation and growth. He gave no information of these, but noted, "Interest rates will remain low because they can't get much lower." On the efforts of countries such as France to push through measures to make their economies more competitive, he said: "The risk of doing too little is higher than the risk of doing too much. These reforms have been planned for years - now they must be implemented."

Consumer inflation in the 18 countries sharing the euro rose 0.1 percent month-on-month in August for a 0.4 percent year-on-year increase, the EU's statistics office Eurostat said last week, revising upwards its initial estimate, from Aug. 29, of a 0.3 percent annual gain. Inflation has fallen steadily since the end of 2011, reflecting a weak Eurozone economy and near-record unemployment, after a debt crisis nearly ripped the bloc apart. Economic growth came to a standstill in the second quarter, and Italy has slipped back into its third recession since 2008. Draghi said he saw no danger of outright deflation in the eurozone, saying the biggest danger came from unemployment. On Sept. 4, 2014, the ECB surprised financial markets with a new cut in key interest rates and other measures to ward off deflation in the single currency area. The announcement sent the euro down to the lowest level against the dollar for 13 months and boosted European and U.S. stocks. Against a background of growing concern that the eurozone was on the verge of a dangerous spiral of falling prices, the ECB cut its central "refi" - refinancing rate - to 0.05 percent from 0.15 percent. It also lowered the deposit rate to minus 0.20 percent and trimmed its marginal lending rate to 0.30 percent. But the central bank's anti-deflation tools need not stop there.

"Should it become necessary to further address risks of too prolonged a period of low inflation, the governing council is unanimous in its commitment to using additional unconventional instruments within its mandate," Draghi vowed in what markets took as a hint at what is known as "quantitative easing." He said a "QE" program - a radical policy used by other central banks such as the U.S. Federal Reserve and Bank of England of buying securities on a big scale to inject cash into the economy - had been discussed.