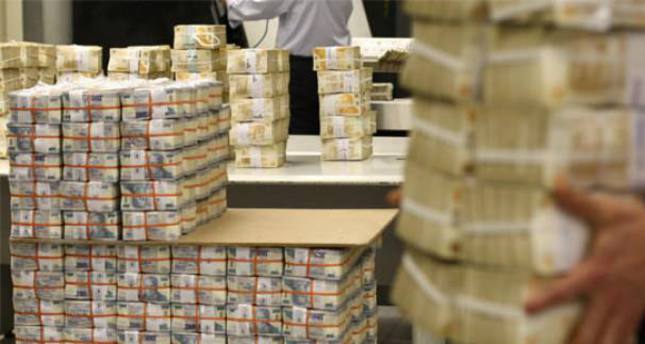 by AA Sep 27, 2014 12:00 am
The Central Bank of Turkey has announced it will increase the daily foreign exchange auction amount on Monday to $40 million (TL 90.26 million) from a minimum of $10 million. According to a statement by the bank on Friday on its website, the decision was based on increased volatility in exchange rates. "Due to the heightened volatility observed in the exchange rates, the daily foreign exchange selling auction amount will be increased," the bank said. The Turkish Central Bank started with $10 million in the daily foreign exchange selling auction on July 25. The decision was based on improvement in Turkey's current account deficit, which has decreased by $16.5 billion to $26.7 billion from January to July, according to the central bank.

The value of the dollar compared to the Turkish lira soared to its highest level in eight months on Thursday - with the dollar equal to TL 2.265 - at 3:30 p.m. after the bank's decision to hold interest rates steady. This was deemed to be, in part, a result of new home sales in the U.S. in August surging to their highest level in more than six years. The lira/USD exchange rate started from 2.260 at 9:15 a.m. Friday, and dropped to 2.25 at 16:20 a.m.

The Turkish lira tumbled to almost 2.4 to the dollar and 3.23 to the euro in the first month of the year. The plunge was seen as endangering the Turkish economy, which is dependent on dollar- and euro-pegged transactions and loans. Turkey's Central Bank announced in January that it would intervene in the foreign exchange market by selling dollars after the Turkish lira hit another all-time low against the dollar that month. The bank ploughed at least $3 billion into the foreign exchange market to shore up the currency, which had been hitting record lows almost daily during January. Turkey's Central Bank on Thursday left its one-week repo rate at 8.25 percent, its overnight lending rate unchanged at 11.25 percent, its primary dealers overnight borrowing rate at 10.75 percent and its overnight borrowing rate at 7.50 percent. In a statement issued Jan. 23, the central bank said it was intervening due to "unhealthy price levels in foreign exchange rates." But the bank's first unscheduled currency interventions in more than two years failed to stem the lira's slide. After that, it called an interim meeting with its Monetary Policy Committee on Jan. 28, following a sharp decline in the Turkish lira against the dollar and the euro. And on Jan. 29, the Central Bank of Turkey introduced drastic interest rate rises in response to the rise of the dollar against the lira in mid-January.