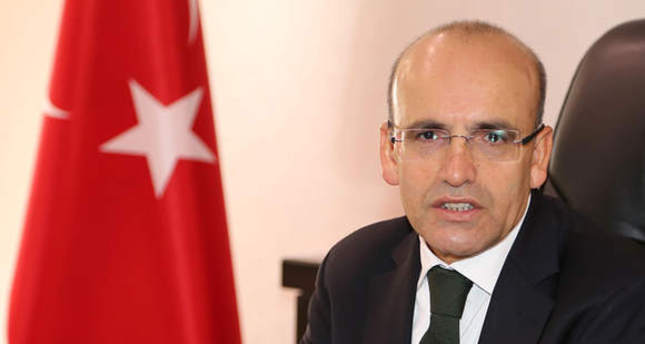 by AA Sep 29, 2014 12:00 am
A reassessment of Turkey's credit would be a fair thing to do in light of Turkey's economic resilience to many challenging factors, Turkey's Finance Minister said on Monday.

Speaking in a TV interview, Şimşek said the whole picture suggests that Fitch should keep Turkey's sovereign rating on hold, citing that the country is continuing to grow at a moderate but more sustainable pace despite the challenges arising from geopolitical tension and the fragile recovery in Europe.

"Let's look at the whole picture. We have political stability and fiscal discipline. Turkey's debt level is low, the current account deficit is low and keeps shrinking, inflation is almost at its peak [with little chance of rising] and growth ticks are at a reasonable and sustainable level," Şimşek said.
He also added, "When you look at the entire picture, it would be a mistake to downgrade Turkey's credit rating because of the possibility of an interest rate hike from the U.S. Federal Reserve or an increase in the geopolitical tensions of the region."

He stressed that Turkey's largest export market, the EU, has shown a much slower rebound than anticipated. He underlined the economic effects of the crisis in Iraq – Turkey's second largest export market – but maintained that a growth performance between 3 and 3.5 percent is more likely.
Markets have set their sights on Fitch's announcement regarding Turkey's credit rating, which is due on Oct. 3. Close attention will be paid to how Turkey deals with the increasing tension in Iraq after U.S.-led airstrikes on ISIS-held sites were initiated as well as the effect of intensified interest rate hikes from the U.S. Federal Reserve.