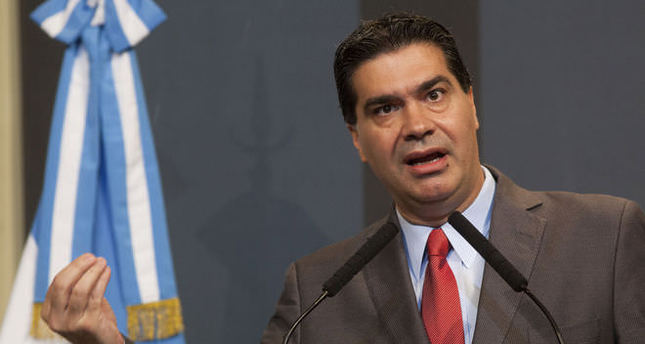 Argentina’s government said Wednesday it plans to take legal action against financial market traders and others who speculate against economic stability by buying U.S. dollars on the black market

"Those who engage in illegal or speculative action, or an attack on economic stability, must be quickly identified and punished because this is the way to ensure monetary and economic stability for all Argentines," Cabinet Chief Jorge Capitanich said during a televised press conference. He said currency traders and stockbrokers could lose their operating licenses or be fined if found speculating against economic stability, such as by spreading rumors through the media. If these actions are found out, "the justice system must act," Capitanich said.He also slammed economists who he said work under contract for companies, exporters, stock brokers and media companies to make dour economic forecasts that can hurt consumer and investor confidence, and in turn the economy. "They attack all the time" with the objective of marring the credibility of the government and the state, he said. "This is an active coup."

Capitanich's comments came after the peso plunged to a low of 16 against the dollar on the black market last week for a spread of 90 percent with the official rate of 8.43 per dollar. People turned to greenbacks as a refuge for their savings on concerns of a deeper recession and currency devaluation after the country fell into default for a second time in July and now faces another default this month.

Argentina is struggling to find a solution with creditors who won a lawsuit to collect $1.5 billion on bonds left over from a $100 billion default in 2001. It is a legal battle that has pushed Latin America's third-largest economy to be found in contempt of a U.S. federal judge's orders. Most economists have cut their economic forecasts in the wake of the default, warning of a contraction of 2.5 percent instead of 1 percent previously, and saying that inflation could surpass 40 percent annual.

With the flight to dollars, the Office of Economic Crime and Money Laundering said this week it would draft a bill to step up controls on illegal currency trading, including using the police and other armed forces to make raids and equipping the central bank to investigate currency trading crimes. President Cristina Fernandez de Kirchner slammed bankers, exporters, executives and farmers for the currency speculation in a televised speech late Tuesday. "They are putting pressure on the exchange rate so that there will be a devaluation" to improve profits by reducing their costs in dollar terms, including salaries, she said. She also slammed the hedge funds that won the U.S. lawsuit, indicating that there is a plot to topple her administration. "If anything happens to me, don't look to the Middle East but look to the north," she said alluding to the U.S. court case.

Fernandez de Kirchner has used such tactics in previous complicated situations, including when she called farmers coup-mongers during a four-month rebellion in 2008. This time, however, "she is attacking everybody," said Federico MacDougall, an economist at the University of Belgrano in Buenos Aires. He said this is for two reasons, one the stress of managing a sagging economy and a new debt default, and the second is strategic. "She feels boxed in, and the best way to sustain her support is to play the victim and create an enemy," MacDougall said. "And it is even better to create many enemies."

This way, he said, she can maintain the allegiance of her core supporters, numbering about 25-30 percent of the electorate, while taking steps to find a way out of the default. The likely options for getting back on track with debt payments is to play for time until 2015, when it will be easier for the government to settle with the plaintiff creditors and others in their situation, who have claims for about $15 billion.

A rights upon future offers clause expires Dec. 31, 2014. Until then, this clause allows the 92.4 percent of creditors from the 2001 default who accepted 30 cents on the dollar in 2005 and 2010 restructurings to collect anything better that is paid to those who didn't participate, a bill that could surpass $120 billion according to government estimates. "The government is going to do whatever it can to get to Jan. 1, 2015 so that it can then get out of debt" with the holdout creditors, MacDougall said.

The other challenge is to pull the economy out of recession, a main source of social tension. "All the ghosts that the president sees would be eliminated if we had a stable economy, a stable currency," Luis Etchevehere, head of the Rural Society, a leading agriculture group, said on Radio Mitre. "Rather than blaming all the sectors of the economy, (the government) should look a little at what they did to get to this point."