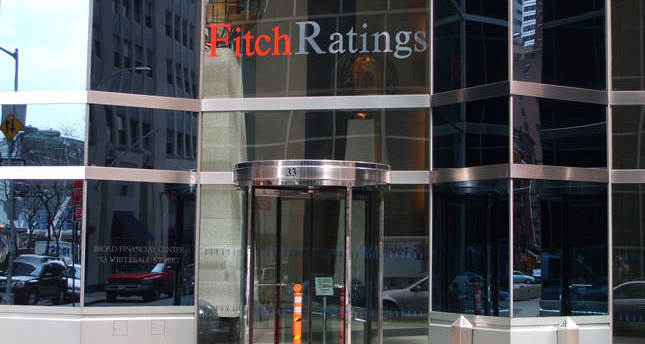 by Daily Sabah Oct 03, 2014 12:00 am
Fitch, an international credit rating agency which has been strongly criticized by economists and Turkish politicians for its inaccurate ratings regarding Turkey, has kept Turkey's rating unchanged at 'BBB-' on Friday. According to the statement posted by Fitch, which upgraded Turkey's year-end growth rate to 2.7 percent from 2.4 percent on Aug. 19, pointing to the country's robust banking system and strong first-quarter growth performance, even with this Turkey's rating still remains the same.

A reassessment of Turkey's credit would be a fair thing to do in light of Turkey's economic resilience to many challenging factors, Turkey's Finance Minister said on September 29. Speaking in a TV interview, Şimşek said the whole picture suggests that Fitch should keep Turkey's sovereign rating on hold, citing that the country is continuing to grow at a moderate but more sustainable pace despite the challenges arising from geopolitical tension and the fragile recovery in Europe.

"We have political stability and fiscal discipline. Turkey's debt level is low, the current account deficit is low and keeps shrinking, inflation is almost at its peak [with little chance of rising] and growth ticks are at a reasonable and sustainable level," Şimşek said.

Turkish President Tayyip Erdogan warned credit rating agencies that Turkey could cut ties with Moody's and Fitch and his prime minister saying the country did not have the ratings it deserves. According to Turkish media outlets, Erdoğan as telling reporters on his plane back from a visit to Qatar late on September 16 that such statements were politically motivated rather than based on assessments of the economy.

"We stopped our cooperation with Standard & Poor's and if they continue on this path, I can tell the prime minister to stop cooperation with these two (Moody's and Fitch) also," the Sabah daily quoted Erdoğan as saying, although he added such a point had not yet been reached.

Standard & Poor's said last year it had failed to reach a deal to offer a full rating for Turkey and would only issue "unsolicited" assessments - meaning it is not paid by Turkey to provide coverage but does so anyway to meet investor needs.

Similar to Turkish economists and cabinet members, international finance expert questioned the actions and credibility of credit rating agencies (CRA) such as Fitch Ratings, Moody's and Standard & Poor's (S&P) particularly after the global economic meltdown in 2008. Timothy Ash, the chief economist for emerging markets at Standard Bank, said that CRAs are usually conducting the rating procedure in line with the demands of other clients even if there is no agreement between them. Ash stressed that Turkey's economic track record was not evaluated well enough by CRAs and added, "One of the problems of the rating agencies is that they do not work sufficiently on Turkey's track record regarding debt payment and its willingness to pay its debts. While Turkey is sometimes unfairly punished despite paying all its debts; Russia, which could not discharge its debts between 1999 and 2000, was awarded with extra notes."