German industrial production falls most since 2009 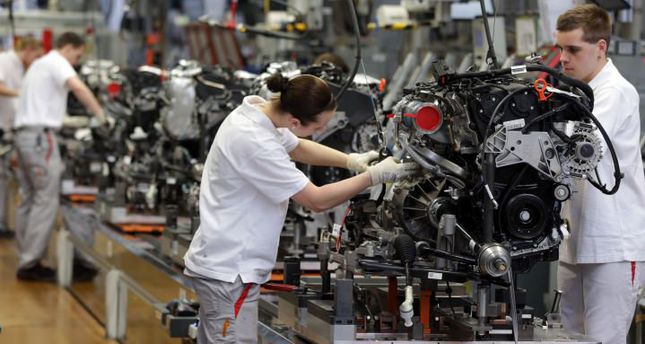 by Oct 07, 2014 12:00 am
German industrial production dropped in August at its fastest pace since the height of the global financial crisis in early 2009, adding to signs that Europe's biggest economy could be facing a slowdown.

Output contracted by a more-than-forecast 4 per cent from July, when it had gained 1.6 per cent on the previous month, the Ministry of Economics said Tuesday. Analysts surveyed by dpa-AFX had predicted a 1.5-per-cent drop.

"The trend is down," said Commerzbank economist Ralph Solveen. "At best, the German economy probably stagnated in the third quarter."

The fall in August represented the biggest decline since January 2009, a period of economic decline following the 2008 collapse of US investment bank Lehman Brothers. Now, the eurozone's faltering recovery and geo-political risks weigh on Germany's economic performance.

The German economy contracted quarter on quarter by a surprise 0.2 per cent in the three months to the end of June.

Since then, tensions in the Middle East, Hong Kong and in Ukraine, as well concerns about the spread of the deadly Ebola virus, have taken their toll on economic confidence and growth in Germany.

German factory orders plunged by 5.7 per cent in August, the economics ministry said on Monday, with foreign demand tumbling by 8.4 per cent.

Data to be released on Thursday is forecast to show German exports also posting a steep fall in August.

German business confidence is now at its lowest point in nearly 18 months, the Munich-based Ifo economic institute said last month, and unemployment posted a surprise gain in September, when it rose for a second consecutive month.

Leading the slump in German industrial production in August was an 8.8-per-cent decline in the output of investment goods, while the manufacture of goods and materials used in production - so-called intermediate goods - fell 1.9 per cent, the data showed.

"The industrial part of the economy is going through a weak phase," the ministry said, pointing to late summer school holidays in parts of the country as a factor in the decline. "The third quarter as a whole is facing weaker output."

Production of consumer goods was down 0.4 per cent and construction slumped 2 per cent, the ministry said, adding that energy output rose 0.3 per cent.