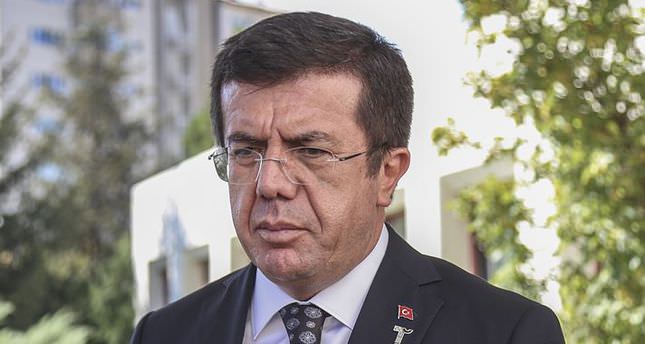 “Any action taken to destroy the peaceful climate, the Reconciliation Process and any sense of solidarity is treason. This means betraying both the Turkish and Kurdish nation,” said Zeybekci

Minister of Economy Nihat Zeybekci defined the latest protests, which have swept through Turkey using Islamic State of Iraq and al-Sham (ISIS) terror in Kobani for ammunition, as treason. The Turkish business world is extremely worried about the latest acts of violence and the possibility of such protests jeopardizing the reconciliation process.

Economy Minister Nihat Zeybekci added Turkey has welcomed 1.5 million Kurdish citizens and has invested at least $4 billion (TL 9.05 billion) in the region and would no doubt spend more. Various businessman associations condemn the acts and the provocative discourse and called everyone to common sense.

President of the Independent Industrialists' and Businessmen's Association (MÜSİAD) Nail Olpak issued a written call for peace in order to condemn ISIS attacks in Kobani and to prompt international society to take action. "We are extremely concerned about the violence that is being triggered lately in our country with protests and also from the curfews imposed as a result. We are deeply worried about any kind of discourse and act that would jeopardize the Reconciliation Process and we condemn the violent protests that have even resulted in deaths using ISIS actions in Kobani as an excuse," said Olpak. He further added that as MÜSİAD they believe that the protestors' right to free expression clashes with the completion of the "Reconciliation Process," which we define as the "Big Peace Project." "Disobeying others' rights while demanding justice is unacceptable," said Olpak.

On the other hand, Turkish Industry and Business Association (TÜSİAD) has published a press release emphasizing that it would be an irresponsible act to link the reconciliation process with what is happening. In their statement TÜSİAD said: "We can understand the rightful reactions and feeling of solidarity of the nation toward the Kurds of Kobani over the possibility of ISIS occupation. However, for such protests to evolve into violent attacks would cause Turkey to return to its dark days." The statement also claimed that the events taking place in Kobani and other neighboring countries deeply concerns Turkey and that the situation needs to be resolved through international action. The statement also highlighted: "As a business association which had believed in and supported the Reconciliation Process from the beginning while trying to minimize the economic effects of the situation, we believe that the situation in Kobani should not be linked to the Reconciliation Process."

Chairman of the Istanbul Chamber of Commerce (İTO) Başkanı İbrahim Çağlar also stated that no one can benefit from such violent protests and that such actions are also damaging the businesses of tradespeople and salespeople. "No one in Kobani would benefit from such violence shown in Turkey. Such acts also damage the economy. Turkey has been through various elections and many steps have been taken to secure the Reconciliation Process. We are deeply concerned about such violent acts that are occurring right before the completion of the process," said Çağlar.

Various other business organizations also reacted to the call of the People's Democracy Party (HDP) and Democratic Regions Party (DBP) to the nation to protests and organize demonstrations. NGOs deemed such acts as attempts to sabotage the Reconciliation Process and highlighted that such public demonstrations would help neither Kobani nor Turkey.

The business world also emphasized the fact that the regional economy has already suffered a deep economic loss and called for common sense. Chairman of South Eastern Industrialists and Businessmen (GÜNSİAD) Şah İsmail Bedirhanoğlu underlined the fact that these violent protests are causing conflicts and clashes between Hezbollah and the PKK and jeopardizing the Reconciliation Process. "We have to immediately stop this, otherwise the price will be extremely high," said Bedirhanoğlu.

President of the Urfa Chamber of Trade and Commerce İbrahim İletmiş had also criticized the HDP and BDP. "We had embraced the residents of Kobani and opened our borders as Turks, Kurds and Arabs. But now, Kobani is being used as an excuse. The deputies of the BDP are throwing stones at our soldiers and trying to provoke people. We are deeply concerned about the BDP's stance," said İletmiş. He further highlighted the fact that various investments have been made in the region in order to support the Reconciliation Process and how the region has started to develop, adding, "The government has proved their sincerity and belief in the process but there are some that do not want the region to progress."

Chairman of the Mardin Chamber of Trade and Commerce Mehmet Ali Tutaşı deemed these acts as "vandalism." "Now shops are closed and the public is anxious in Mardin. It does not make any sense to destroy your own nation's property and damage your own people while you are worried about Kobani. Our losses have reached millions of TL now," said Tutaşı. The chairmen of various other chambers of commerce located in the region also condemned the violent protests and warned the citizens against being provoked. Reminding that Turkey has welcomed hundreds of thousands of people who escaped the attacks in Kobani, General President of the Confederation of Turkish Tradesman and Artisans (TESK) Bendevi Palandöken also condemned the situation. "Although we have not remained silent about the drama in Kobani, there are some that want to benefit from the situation. We will criticize any kind of discourse or act that would jeopardize our country and endanger our common stance," said Palandöken.