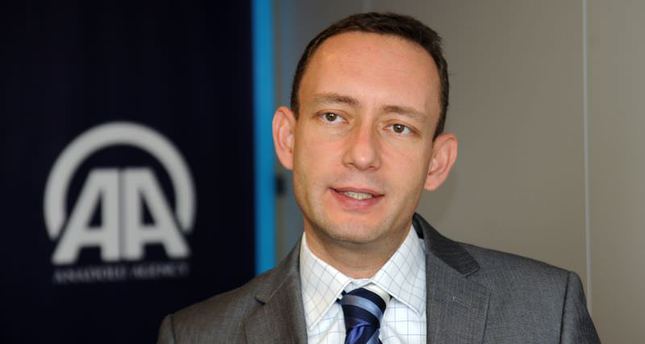 by Daily Sabah with AA Oct 09, 2014 12:00 am
Turkey's economy is ready for faster growth in a more stable environment, Fitch Ratings Director Gergely Kiss said. "We affirmed Turkey's BBB- rating and we see a stable outlook. Supporting this view is the relatively strong Turkish credit profile." Kiss said in an exclusive interview with the Anadolu Agency (AA).

"It is important to see that Turkey has a strong fiscal position, its debt has declined over the last 2 years and also the deficit is below 3 percent of GDP," Kiss explained. Fiscal consolidation, which is the implementation of concrete policies aimed at reducing government deficits and debt accumulation, has been managed with considerable success in Turkey, according to studies by the Organisation for Economic Cooperation and Development. Kiss also stated that the economy continues to show encouraging signs of rebalancing, notably a moderation in the current account deficit and credit growth with stable capital inflows. Economist Taha Meli Arvas told Daily Sabah, "Fitch's reaffirmation of Turkey's investment grade status coupled with its stable outlook for the country was something that investors were looking for. These comments were especially important for Turkey which is on the cusp of becoming embroiled in a serious armed conflict in Syria. Foreign investors especially will pay heed to Fitch's comments and stay the course if they already invested in Turkey and these comments may also attract new investors, especially those exiting the eurozone and other troubled economies."

Kiss warned, however, that Turkish exports are suffering from the continuing conflict in Iraq. In the last two years, Iraq has become the second-largest export market for Turkey, and the violence in Iraq is affecting its ability to import. However, Turkish exports increased by 6.5 percent in September compared with the same period in the previous year, according to the Turkish Exporters' Assembly.

For Turkey's credit outlook to improve, Kiss pointed out the importance of controlling inflation, stimulating growth and narrowing the current account deficit.

"Less reliance by lenders of foreign capital, which would reduce the current account deficit, and further progress on income distribution, would be two factors that would make for a positive improvement," Kiss said.

Regarding Turkish economic growth, Kiss said that performance would hit rock bottom with 2.7 percent this year and then start to speed up again next year.