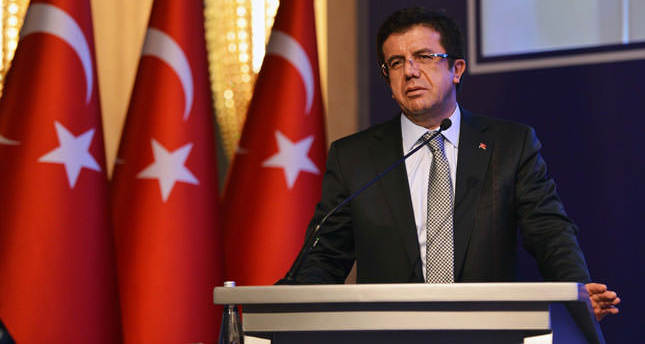 Economy Minister Nihat Zeybekci responded to questions about the mid-term economic program, saying, “The current predictions are a bit more conservative, and we exaggerated shrinking demand with our fight against inflation.”

Deputy Prime Minister Ali Babacan announced Turkey's mid-term economy program on Wednesday and comments have continued since then. Minister Zeybekci responded to questions during his visit to Japan and evaluated the declaration. Minister Zeybekci said, "We believe the $106.5 billion (TL 238 billion) estimated for total exports will be closer to $162 billion, which will contribute to a higher growth rate," adding that there are differences in reality from last year's predictions and targets.

While 4 percent growth rate was targeted, this year the growth rate will be around 3.3 percent, Zeybekci said that he believes the domestic market will contribute to the growth rate in the last quarter. "Exports will account for 2.5 percent of the growth rate at the end of the year," said Zeybekci. He further underlined the significance of the fight against inflation and how that fight should be realized through more production, growth, employment and supply. "We have focused too much on shrinking demand. That is why we couldn't achieve the growth target of the Mid-Term Economic Program," said Zeybekci who noted that although demand shrank, if more financing and loans could have been offered to production, SMEs and investments, the growth figures would have been different.

"Another positive deviation in the program is observed in the current account deficit. While the target was 6.4 percent for the end of the year, the deficit is likely to drop down to 5-5.5 percent. Now the target in the program is revised to 5.7 percent. When the current account deficit drops below 5 percent, there will be nothing to worry about. With the positive developments in energy prices, the current deficit next year will be much lower," said Zeybekci.

Stating that exports to Iraq improved in September and October and recovery is expected to continue till the end of the year, Zeybekci said that the approximate $3 billion loss could be recovered. Zeybekci said that Iraq was the second largest export market for Turkey, but due to the recent clashes and turmoil, it is now the third largest market; however, if exports recover this month, Iraq might again become the second largest export market. In 2014, Russia and Turkey tried to overcome obstacles hindering trade between the two countries, and in 2015, by signing preferential trade agreements, economic cooperation between the two countries could improve. Noting that the Russian market is crucial and the timing is favorable at the moment, Zeybekci said that he believes this economic cooperation will create various opportunities for the 2015-2016 Mid-Term Economic Program. "Hopefully, we will increase per capita income to $12,750, the high-income group, by the end of 2016. Zeybekci said that they have "been very brave and generous with investment incentives" and added that they have noticed a few fields in which they should have provided more incentives, such as metallurgy. "We will use all incentives available both strategically and regionally in the metallurgy field. Anyone who wants to make an investment should apply to us, and we will try to meet their needs," said Zeybekci.