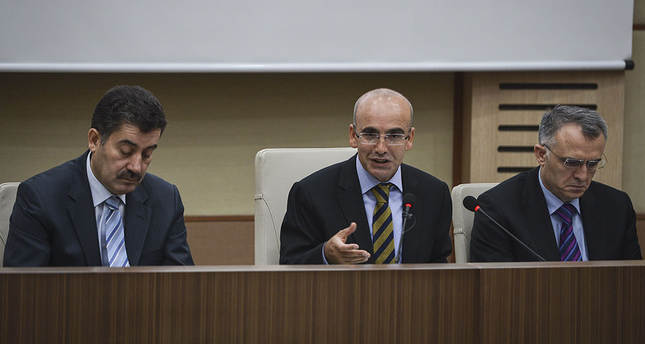 by Daily Sabah Oct 15, 2014 12:00 am
Turkey's Finance Minister Mehmet Şimşek made a press statement in Ankara on Wednesday regarding 2014 budget goals and 2015 budget proposal that will be proposed to the Turkish Parliament's approval.

Minister Şimşek stated that the budget deficit for the nine month period realized as 11.9 billion TL and non-interest deficit as 4.6 billion TL.

"2014 Budget deficit will be lower than the annual goal" Şimşek said, stating that 2014's budget deficit is expected as 24.4 billion and primary surplus as 25.8 billion TL, with budget deficit would only be 1.4 percent of Turkey's GDP instead of 1.9 percent.

Turkey's 2015 budget expenses are expected as 472.9 million TL and budget revenues as 452 million TL Şimşek added, and the government will continue to curb the inflation and current account deficit (CAD) in order to achieve higher growth rates.

"If the current downtrend in oil prices continue, we can see that CAD will decrease under 5 percent of Turkey's GDP" Şimşek said. "Turkey cannot accept 3-4 percent growth rates, we should re-align ourselves in high growth path."