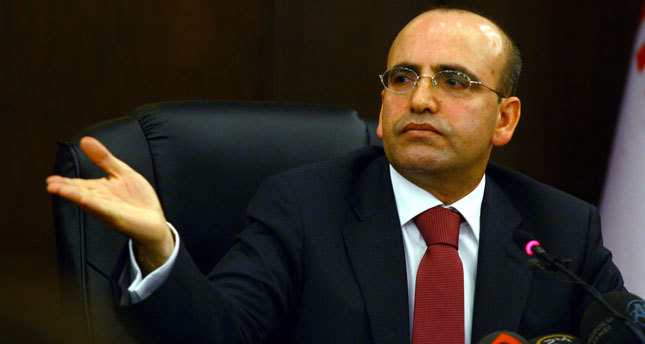 The Finance Minister described the economic performance of Turkey over the last 10 years as ‘not bad,’ touching on reforms in education, health and finance

Speaking at the 4th International Economy Conference, Minister of Finance Mehmet Şimşek stated that national income has increased from $230 billion (TL 517.59 billion) to $820 billion and added that Turkey aims to become one of the two largest countries in Europe by the 2050s, 2060s, and one of the top-10 largest economies in the world by 2023.

Underlining that the ministry are taking firm steps in improving the quality of the labor force, Şimşek said that since the most crucial problem is education; companies and institutions are spending 18 percent of their budget on training.

Şimşek also said the aviation industry has advanced extremely far and while the number of airports has doubled, the number of passengers has tripled with the various large-scale projects initiated within the last few years in Turkey.

Discussing the newly revised health care system, Mehmet Şimşek stated that unlike many other countries Turkish citizens can now choose between public and private hospitals; which is increasing competition. "I believe Turkey will become one of the leading health care exporters during the next 10 to 15 years. In 2012, health service exports were around $2.5 billion; we are hoping to increase this by ten times within the next 10 to 15 years," said Şimşek.

Şimşek further stated that the government has taken steps and developed incentives in order to improve capital markets - one of the government's most important targets. He said that they are aiming to make Istanbul one of the top 25 finance centers of the world and Turkey one of the top 30 countries in the global financial development index.

Underlining that the energy issue is a major stumbling block for Turkey, Şimşek added, "We largely depend on foreign resources for energy. We are 74 percent dependent on foreign countries regarding primary energy resources. This contributes to a huge foreign trade deficit. Today, we import $56 billion worth of energy, whereas this figure was only $9 billion in 2002."

Şimşek noted that Turkey is not at a desired level in producing and exporting hi-tech goods and stressed the necessity for more R&D activities. "The ratio of spending in R&D studies to the national income has doubled in the last decade. We are intending to double this figure by 2018 once again," he said, describing this as an ambitious target.

Şimşek continued, "We are not that far away from Europe in terms of the ratio of public R&D spending to national income. Actually, the private sector is quite far away from Europe at this point. But, we have given incentive payments to the private sector in recent years and these are newly yielding fruits." He also stressed that as a result of R&D studies, patent applications increased more than six fold while industrial design saw more than a 2-fold increase, which helped Turkey take second rank in this field after Germany and France.

Mentioning the govenrment's fight upon the informal economy, Şimşek stated that they have decreased informal employment considerably. "Although the ratio of the informal economy to the national income has been minimized to a significant extent, we could not yet reach the desired level and we are working on a new middle-term program," he concluded.