Growth to be key factor within next 10 years 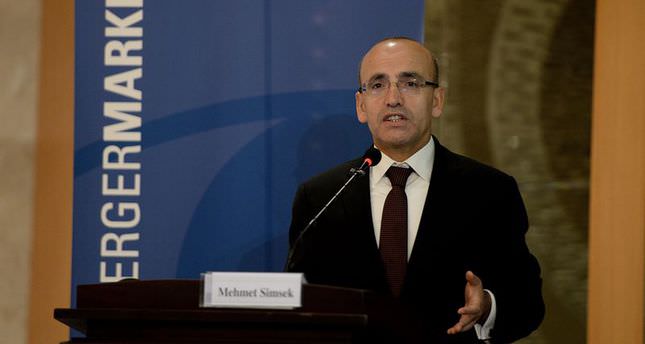 by Daily Sabah with Agencies Oct 22, 2014 12:00 am
During a meeting at the "Turkey Special Capital Forum 2014," Finance Minister Mehmet Şimşek said, "Growth will be a key factor within the next 10 years. Turkey will change in the next 10 years, in an environment where growth is sluggish and growth potential has fallen by comparison to the last 10 years. We have already prepared the grounds for this change."

Şimşek stated that growth is the main driver of company acquisitions and business combinations and that it will strengthen these activities, describing Turkey's last 10 years as significant in this respect.

Underlining that the next 10 years will be even more critical, Şimşek continued, "The reason for this is that when we look at the global economy and developing countries in the last 10 years, we see very high commodity prices. The environment of very low interest rates is continuing at the moment, but it will end sooner or later. This is a period in which global liquidity is abundant. Therefore, it is also a period where growth is relatively high."

Şimşek also mentioned that economic management, under the presidency of Deputy Prime Minister Ali Babacan, has been working for a long time on a comprehensive package, which includes second and third generation reform packages. Defining the reform package as the new ring of change and transformation in Turkey, Şimşek said the studies regarding it will be finished by the end of the year.

Şimşek said that some of these reforms will be implemented before the 2015 general elections while the others will be put into practice immediately after the elections, adding that the reform program includes transformations to be made in 25 fields with more than 1,200 reform measures to be taken.

Touching upon Turkey's 2023 vision and goals, Şimşek remarked that they are assertive targets which were set before 2002. "There has been a global crisis since then. In the post-crisis period, there is almost a recession in Europe. There is great turmoil in the Middle East. Despite all this, Turkey will decisively move on its path to realize its 2023 targets with this reform program and with what it will do in the upcoming period," he said. Şimşek also stated that Turkey's growth will be moderate in the short run. "It is true that we cannot grow as much as Asia. With these reforms, we lay the foundations for growth as rapid as Asia's," he concluded.