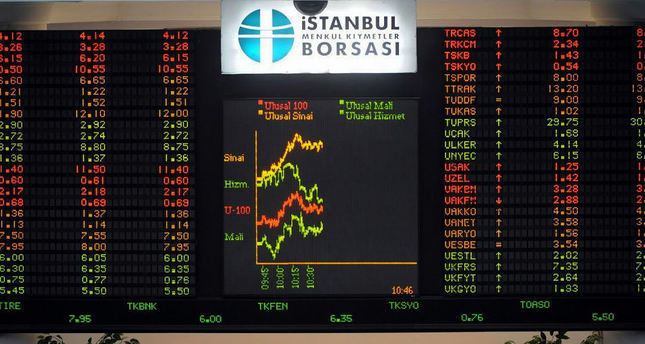 by AA Oct 23, 2014 12:00 am
The Turkish Central Bank has left its benchmark interest rate at 8.25 percent for a third month, according to a Central Bank statement Thursday.

The Central Bank's decision was observed closely by markets amid expectations of a U.S. interest rate hike, a surge in U.S. dollar, and September's adverse inflation figures for Turkey.

The Monetary Policy Committee left the benchmark interest rate unchanged and stressed the bank's commitment to tighten its monetary policy until there is a significant reduction in the inflation outlook.

The bank said elevated food prices are delaying an improvement in the inflation outlook.

"Meanwhile, current levels of commodity prices, in particular declining oil prices, are expected to contribute to disinflation foreseen for the next year," the bank said. "Inflation expectations, pricing behavior and other factors that affect inflation will be closely monitored and the tight monetary policy stance will be maintained ... until there is a significant improvement in the inflation outlook."

Policymakers kept the overnight lending rate at 11.25 percent and maintained its overnight borrowing rate at 7.50 percent.

The committee's decision to leave rates where they were was widely expected, as Turkey's statistics authority, TurkStat, reported on Oct. 3 that the Consumer Price Index had risen to 8.86 in September. That put the annual inflation rate well above the Central Bank's year-end forecast of 7.6 percent and even further over the 5 percent medium-term target.

Interest rates have been a topic of debate between the government and Central Bank officials since early this year, when then-Prime Minister Recep Tayyip Erdoğan, who is now president, criticized the bank for keeping interest rates high. The rates were limiting economic growth, Erdoğan said.

The bank raised rates sharply at the end of January to combat a record fall in the Turkish Lira amid an emerging markets sell-off and political turmoil prior to March 30 local elections. It slashed rates by 0.5 percent , 0.75 percent and 0.50 percent in its May, June and July meetings.