WB Turkey: Turkey should not be modest about its strengths 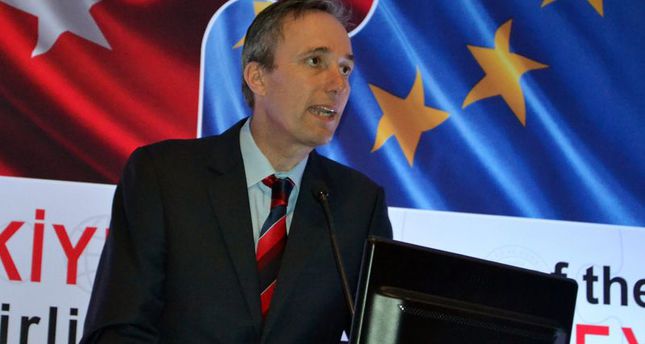 by Daily Sabah with AA Oct 23, 2014 12:00 am
Pointing to the significance of Turkey's strategic position in the heart of Asia, Europe and the Middle East, Raiser suggested that Turkey should turn this advantage into economic gains, which is only possible by attracting more direct investments. Warning about Turkey's falling direct investment figures, Raiser said, "Both foreign and local direct investment flows into Turkey have been decreasing for the last six quarters, with the exception of the last quarter of last year." Attributing this deceleration to the investor's lack of confidence in the short-term, Raiser suggested, "It is possible for Turkey to increase the confidence of direct investors by making immediate structural reforms in this field."

Raiser also warned that the U.S. Federal Reserve's tighter monetary policy would pose some risks for developing countries, as well as the strengthening USD may push up inflation. Raiser further noted that the regional security issues have not so far had a remarkable impact on the economy; however, the uncertainty caused by the continuation of violence may create risks.

Raiser also stated that Turkey's exports to the EU increased this year again as European countries reached positive growth rates. "But the Turkish exporters headed toward the Middle East when the EU countries faced a slowdown. Turkey is so lucky to have flexible exporters who can quickly switch from one market to another," he added.

Warning about the two challenges ahead of Turkish exporters in the long-term, Raiser continued: "The first one is that Turkey is not sufficiently represented in the Asian market, which is the fastest growing and the most competitive one in the world. Here, the question is whether Turkish exporters will display a good performance in the Asian markets. This matter should be included in the medium-term targets of Turkish foreign trade policy." According to Raiser, the second challenge is about improving the quality and enhancing the variety of export goods. "Turkish export goods, which are produced with mid-level technology, have a significant market in Europe, but, there is not adequate demand for them in the Asian markets, which also manufacture goods in the same category. Turkey should upgrade its goods to a higher level of technology to have a share in this market," he stated.

Referring to developments in the construction sector, Raiser said that it is quite natural for Turkey to have a growing residential sector due to its growing population, adding, "The regulations to be made in the tax system will increase real property taxes, which will cause investors to move toward industry."

Raiser suggested that Turkey should prioritize reforms, saying: "After the financial crisis is over, there is an atmosphere as if everything is on track and reforms are unnecessary. But, we now see that two main drivers of growth, high domestic demand and cheap liquidity, will not be enough to maintain sustainable growth. Therefore, Turkey should soon realize its structural reform package as soon as possible before the next general elections."