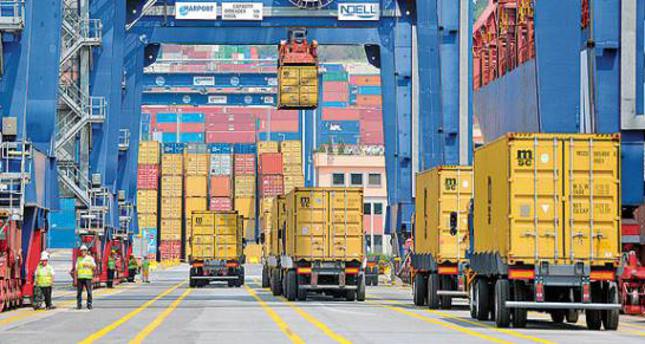 by Daily Sabah with Agencies Oct 25, 2014 12:00 am
President Recep Tayyip Erdoğan said that the criticism directed at the Turkish economy are false and unfounded and added, "Turkey will continue to grow and get stronger despite these smear campaigns."

Speaking at the opening ceremony of the Turkish-Latvian Business Forum, organized at the National Latvia Library, together with Latvian President Andris Berzins, President Erdoğan said that despite the ungrounded criticism directed toward the Turkish economy by international media organization with ulterior motives in the U.S. and E.U, the Turkish economy still continues to grow. Underlining that such comments about Turkey and the Turkish economy should be thoroughly analyzed, Erdoğan said, "We are now observing a common, incorrect and ill-founded criticism of the Turkish economy by various American and European media institutions. Again, some credit rating agencies are also acting in the same manner and from time to time attack Turkey with ungrounded claims. Yet despite these smear campaigns and incorrect news [reports] about the Turkish economy and Turkey in general, the economy is getting stronger by the minute." Erdoğan also claimed that the current situation of Turkey is apparent and disproves such claims and accusations. "Our economy is growing by approximately 5 percent on an annual basis. Furthermore, strong investments in the banking and financial system are increasing in a consistent manner each year," he said.

Erdoğan further commented on the economic performance of Latvia, stating that Latvia has become one of the highest performing countries in the European Union with a 4 percent growth rate in 2013. "In terms of growth and support provided by international investment, Turkey and Latvia are currently following a successful course in Europe. We highly value increasing the relations between the two countries. We shall strive to increase the trade capacity between Turkey and Latvia, which was $323 million in 2013, to $1 billion as soon as possible," Erdoğan stated. Emphasizing that the objectives set by the public and the private sectors for the year 2023 are compatible and both sectors are willing to show the utmost care and effort in reaching such targets, Erdoğan said, "Turkey, which is maintaining an environment of stability and security, is offering unique and incomparable opportunities for all kinds of investors and entrepreneurs."