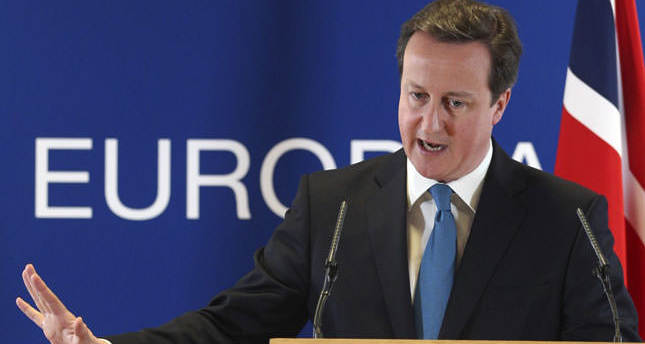 British Prime Minister David Cameron insisted Friday he would not pay a European Union bill for an additional 2.1 billion euro ($2.65 billion) contribution to the EU coffers at a time of increasing pressure at home for the country to leave the bloc

Thumping his fist in frustration, Cameron said "people should be in no doubt: as an important contributor to this organization, we are not suddenly going to get out our checkbook and write a check for 2 billion euros. It is not happening."

Cameron said asking Britain for a top-up of some 20 percent in its contributions on short notice "is an appalling way to behave. We are not paying that bill on the first of December." The Netherlands too has been asked for a big top-up, of 642 million euros, which Finance Minister Jeroen Dijsselbloem called "extremely surprising, unpleasantly surprising."

The EU executive Commission said the demand stemmed from the fact that the economies of some countries, like Britain, have grown more than expected at the start of the year. Contributions are made according to economic size. Dijsselbloem, however, stressed a revision of source material and ways of computing.

Whatever the cause, Cameron and his Dutch counterpart Mark Rutte already discussed a common protest at the EU summit, which ends Friday. The Netherlands too is facing an increasingly vocal anti-EU camp. "We are not going to take this lying down," Dijsselbloem said.

Cameron said EU finance ministers would discuss the issue at an emergency meeting he had called for. The EU's executive Commission said the calculations were an exercise, "a method approved by the member states," said spokesman Patrizio Fiorilli. He said the gross domestic product of Britain and the Netherlands were "a lot higher than they thought themselves at the beginning of the year, so their contributions were revised upward." A longtime reluctant member of the EU, Britain has seen a surge in the popularity of the UKIP party, which wants to get Britain out of the EU, claiming its bureaucracy is profligate. "The EU is like a thirsty vampire feasting on U.K. taxpayers' blood. We need to protect the innocent victims, who are us," said UKIP leader Nigel Farage.

Cameron realized the political headache the EU demand would create as he tries to manage the anti-EU sentiment. "Is that helpful for Britain's membership of the EU? No it's not." The request for the budget top up comes at a time when Cameron has been telling his EU counterparts how well the British economy is doing in the face of the flagging fortunes on the continent, where even Germany is facing sagging growth. Official figures on Friday showed Britain's economic recovery is continuing despite a gloomy world environment. Gross domestic product grew 0.7 percent in the three months through September compared with the previous three months, remaining among the strongest growth rates among developed economies. Treasury Chief George Osborne said the figures show Britain "continues to lead the pack in an increasingly uncertain global economy."