Inflation not to be only determinant for economy 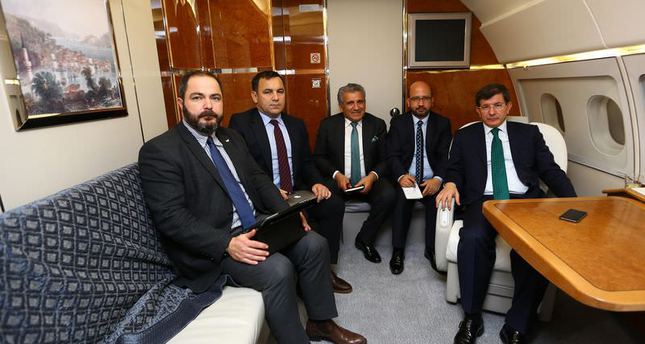 Prime Minister Ahmet Davutoğlu answered questions about the Central Bank of Turkey’s decision to steady interest rates, saying that interest rates would not be the only indicator for economic policy

During his travel from Kayseri to Kahramanmaraş on the weekend, Prime Minister Ahmet Davutoğlu was interviewed on a number of matters regarding the Turkish economy, including the Central Bank of the Republic of Turkey's (CBRT) interest rate policies. Touching upon his recent meeting with Governor of the CBRT Erdem Başçı, Davutoğlu said, "I suggested that the interest rates should be reduced," stressing that his suggestion would not vitiate the independency of the CBRT.

"It would be a proper transaction for the Monetary Policy Committee to cut interest rates as the commodity prices have entered a downward trend in the world and Turkey has successfully managed the process in terms of ensuring its political stability," he said, adding that determining an interest rate policy that would increase the sense of confidence in society was important. He stated that a high interest rate policy would be acceptable if the country had encountered political risks following the presidential election.

Referring to the unfair evaluations of international credit rating agencies regarding Turkey, Davutoğlu stated that those agencies use even the slightest political instability as a reason for downgrading Turkey's note without considering the delicate period the country is going through. Stressing that the elements of an economy are inseparable, Davutoğlu said, "The growth rate in Turkey is not independent from the interest rate policies, which are also not independent from the rate of exchange, and all are related to industrial production." Davutoğlu attributed the failure of inflation forecasts to high food prices that resulted from frost and drought. "So, we see that Turkey's agricultural policy effects inflation, which also affects interest rates. It would be a mistake to consider interest rate and inflation policies separately," he added. Underlining that the central bank's policies are not totally independent from other policies, Davutoğlu noted, "The decisions made by the central bank have an impact on other policies including the country's investment outlook and external financing. The central bank takes all this into consideration while making decisions."

In response to the question of whether or not Turkey will enter stagflation, Davutoğlu said, "If the central bank does not pursue policies to curb the current account deficit and if Turkey does not open up to the Middle Eastern or African markets during the times when Western economies are facing decline, this would lead to stagflation. We would not avoid stagflation because of the central bank's decisions or international conjunctures, but rather because we direct our exports to the right markets at the right time. And, to this end, we opened 35 embassies in Africa."

Davutoğlu continued, "In order to grow, you either need enough supply to balance the domestic demand or the domestic demand needs to stimulate the growth without disturbing the price stability. Or, if the domestic demand cannot be balanced with supply and it creates pressure on the rate of exchange and inflation, you need to solve it with foreign demand. The foreign demand is closely linked with exports policy, which is determined by the government. The incentive policies affect investment, which also affects inflation. Therefore, at such a critical time, we need to maintain the stability of the Turkish economy." Davutoğlu also stated that before the G20 Summit, the government will be announcing more than half of the action plans regarding the transformations in 25 fields, including the new industrial policy, to give an idea about Turkey's economic policies for the next G20 Summit. The remainder is supposed to be explained after the summit.