Turkish-Egyptian trade agreement to be cancelled 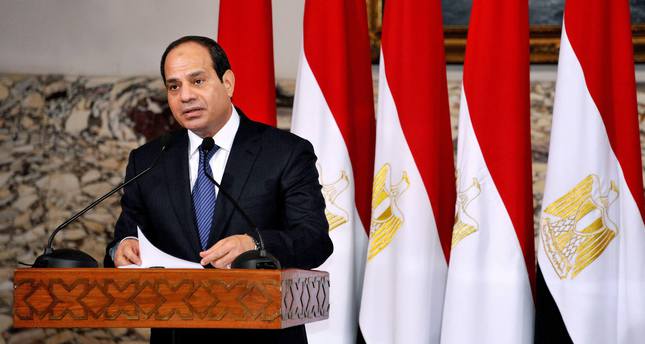 by Daily Sabah with Agencies Oct 29, 2014 12:00 am
The Egyptian government has announced that the trade agreement between Turkey and Egypt, which was signed during the presidency of Mohammed Morsi who was later overthrown by a military coup, will be cancelled.

The Egyptian Transportation Ministry Undersecretary, Ahmet Emin, claimed that the trade agreement, which allows Turkish trucks and ships to use the lands and waters of Egypt, signed during the reign of the Muslim Brotherhood, is damaging the Egyptian economy. According to news published by the Egyptian News Agency, MENA, Emin announced that in coordination with the Foreign Affairs Ministry and other higher authorities, they have decided not to extend the term of the agreement, which will end next March.

Turkish-Egyptian relations have suffered since the Chief of General Staff and Minister of Defense, Abdel-Fattah el-Sissi, overthrew the Morsi government. After the military coup on July 3, 2013, el-Sissi won the general elections. On the annulment of the "Memorandum of Understanding for Ro-Ro and Highway Transit Transportation" signed between the two countries, Turkish Foreign Affairs Ministry spokesperson, Tanju Bilgiç, said, "With this step, the Egyptian Government is adding a new blow to the interests and welfare of its own country and citizens." In a written reply to a question, Bilgiç said that Egypt has unilaterally annulled the Memorandum of Understanding for Ro-Ro and Highway Transit Transportation and will not extend it after April 2015. "While the Ro-Ro and highway transit transportation arrangements' share in trade with the region was of fractional size for Turkey, it was contributing a great deal to the Egyptian economy," wrote Bilgiç.

Commenting on the subject, the Turkish Exporters Assembly (TİM) head Mehmet Büyükekşi, said, "Trade and politics in developed countries are separated. This should be the case with all the countries Turkey engages in trade and business with. Sometimes we encounter such problems with underdeveloped and developing countries. When economic relations with Egypt and Turkey are considered, I believe Turkey has contributed a lot to the Egyptian economy." He further said that Turkey has $2 billion in investments in Egypt, not only in the local market of Egypt but also in production and exports, which are areas that generate employment. "Such actions would damage Egypt more than it would Turkey since all the investors there are companies that are contributing to the exports of Egypt and, thus, the Egyptian economy," added Büyükekşi.