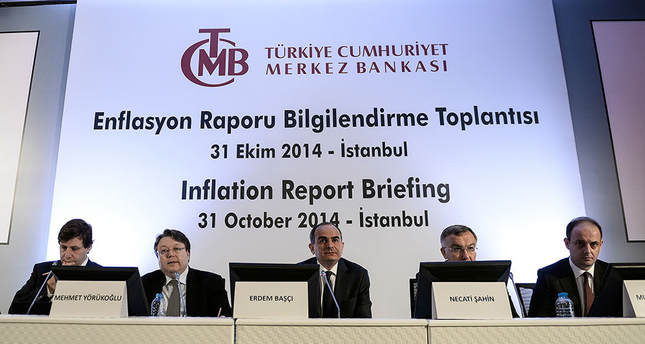 by Daily Sabah Oct 31, 2014 12:00 am
The Central Bank of the Republic of Turkey (CBRT) has announced another increase to its end of year inflation prediction for the third time this year, sliding upward again from 7.6 percent to 8.9 percent.

Başçı said that inflation is expected to be 5 percent in the medium term and that a tight fiscal policy will support such a decrease. In order to decrease inflation, the foreign account deficit should be decreased to 5 percent of Turkey's GDP, Başçı said.

The end of year inflation for food prices is predicted to be 12.5 percent for 2014 and 9 percent for 2015, according to Başçı. A decrease in short term interest rates could be made, depending improvements in the inflation rate, Başçı said, but he warned that it should be considered very carefully.

Başçı said that the CBRT's role is to contribute to balanced growth and that fiscal policy alone cannot drive economic growth.

Replying to questions of economists and press members after the announcement of the fourth inflation report for 2014, Başçı said, referring to the application of tight monetary policies, keeping the long-term and short-term interest rates close is helping to stabilize foreign exchange rates and is also ensuring more sustainable and stable credit growth.

Stating that the yield curve should stay at a horizontal level and since the liquidity policy has an opposite inclination it has to be kept under strict control, Başçı said, "If we observe stability, then we may try to increase the short-term interest rates again down to the 8.25 percent level. However, in order to take that step, we have to observe all conditions very carefully. Since inflation is of utmost importance, we have to be sure that any step we take is not going to damage foreign exchange rates or increase credits."