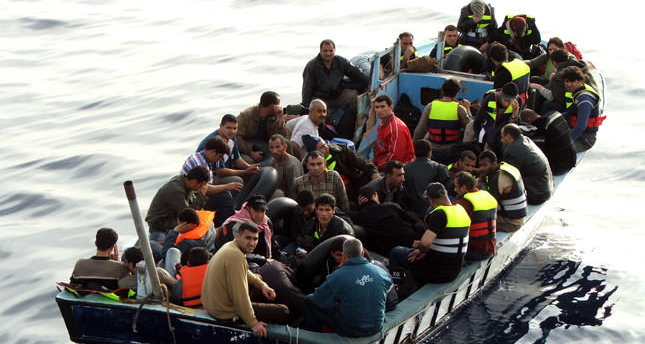 by Barış Ergin
Nov 06, 2014 12:00 am
Due to global wars and clashes immigration problems peaked in 2014 with approximately 3,000 people dead after drowning in efforts to find refuge. Human trafficking has now become a $7 billion market, four times its size in 2013. There has been a serious increase in the number of immigrants who have lost their lives during smuggling, especially on ships.

While 12,430 individuals violated borders between January and April, 2013, this number increased to 40,144 in the same period of 2014. Various routes have been used for illegal entries and the cost is increasing for European countries. According to figures announced by Italy, the amount spent on rescue operations and coastal patrols has already passed 300,000 euros.

Since the wars and clashes in Iraq and Syria intensified in 2014, approximately 165,000 immigrants have tried to enter into Europe as of October, 2014. Greece and Italy have suffered the most from human trafficking and it was noted that about 140,000 people have illegally entered Italy in 2014 with the most illegal immigrants of Syrian and Eritrean nationalities.

The fates of immigrants are deteriorating as well. While 600 people lost their lives in 2013, about 3,000 immigrants were lost at sea the same year. A total of 435,760 people requested asylum in 2013 a figure which was 30 percent less in 2012. Furthermore, 60,800 people applied for asylum to southern European countries with Germany receiving the highest number of asylum requests.