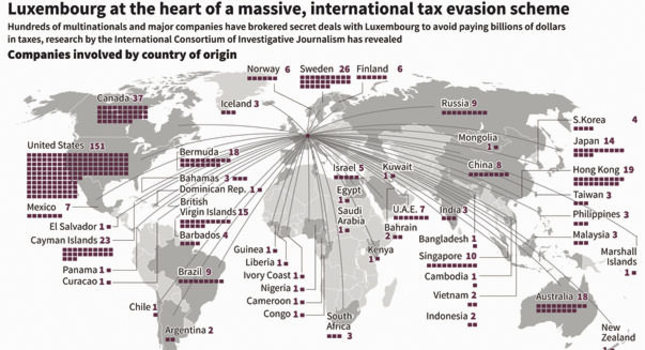 A report by a group of investigative journalists has lifted the lid on widespread tax avoidance facilitated through Luxembourg. Some companies reportedly pay less than 1 percent of profits in tax. Luxembourg is known as a tax haven, but what is surprising is the industrial scale of tax avoidance. These aren't dodgy Ponzi scheme salesmen that are getting their tax avoidance schemes rubber-stamped by the authorities; these are big household names, ranging from Ikea to PepsiCo., with little to no presence in the state. Thousands of companies are reportedly registered at one address. President Barack Obama has accused corporates that duck tax bills of being unpatriotic, while U.K. Prime Minister David Cameron has been highly critical of multinationals that navigate their way around legal systems.

Companies associated with Turkey related to the investigation which named included BC Partners, Bridgepoint, JER Partners, Merill Lynch, Unicorn Investment Bank and York Capital Management, all of which are not originally Turkish.

The revelations risk weakening Juncker's position just days after he took office as head of the EU's executive arm after 19 years as Luxembourg prime minister, the period during which many of the tax deals were sealed.

Juncker's spokesman said the veteran politician was unfazed by the revelations, though he pulled out of a public speaking engagement with former EU commission chief Jacques Delors scheduled Thursday.

Under an hour-long barrage of questions from reporters, the spokesman stressed that EU regulators were already investigating whether Luxembourg's deals with U.S. Internet giant Amazon and the financial arm of Italian carmaker Fiat amounted to illegal state aid.

Spokesman Margaritis Schinas said that if the EU found it breached the rules, "Luxembourg will have to take corrective actions." The EU's new Competition Commissioner, Margrethe Vestager, said she would "of course" press on with those probes and looked forward to forming a "very concrete picture" of the thorny issue.

Vestager stated "a complete change of mood" in the past few years on taxation, with a huge push by G20 nations to agree to new rules to deprive multinationals of easy access to tax havens globally.

The so-called "Luxleaks" documents showed that billions of dollars were funneled through the tiny European duchy of Luxembourg thanks to complex financial structures that allowed companies to slash their tax liabilities, depriving hard-up governments of revenue.

Juncker presided over the tax affairs of Luxembourg for over two decades, transforming the country from a sleepy European backwater into a prized destination where hundreds of the world's biggest companies channel their affairs.

On Wednesday, asked about the tax policies he once led, Juncker said he wanted the Commission to investigate independently and would not interfere with its work. But criticism poured in with Sven Giegold, head of the Greens group in the European Parliament, calling the revelations "a major blow" to Juncker's credibility.

In its investigation, the ICIJ said global accounting giant Price water house Coopers had helped multinationals secure at least 548 tax rulings in Luxembourg between 2002 and 2010. The documents uncovered details of so-called Advance Tax Agreements – pre-negotiated deals that set out how companies will be taxed, the same practice that the EU is investigating in the Amazon and Fiat cases.

The EU has no power over member states' tax affairs as such, but it can probe whether they amount to illegal state aid by giving a company an unfair advantage over its competitors.

If so, then a country is in breach of the 28-nation bloc's single market rules.

Luxembourg's finance minister, Pierre Gramegna, in Brussels for a meeting of eurozone ministers Thursday, said that while the practice was "totally legal" it may no longer be ethically compatible with today's norms. Similar cases have been opened against Ireland for deals with tech giant Apple and the Netherlands with coffee chain Starbucks.

Ronen Palan, Professor of International Politics at City University London, said the ICIJ investigation was a "game changer" that would "prove as damaging to Luxembourg as previous revelations were to Switzerland and Liechtenstein."

Other companies that benefited from the schemes included Burberry, Procter & Gamble, Heinz, JP Morgan and FedEx – many of which use Luxembourg as one of several tax havens to optimize earnings.