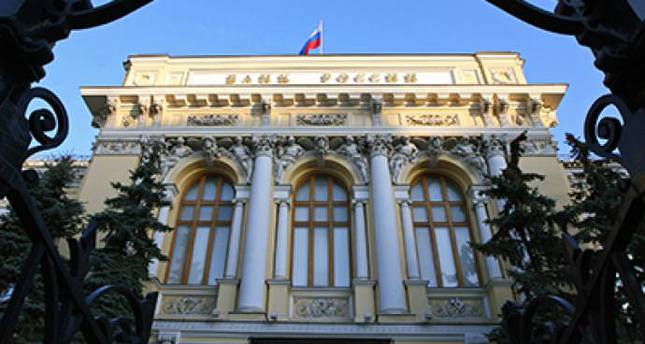 In an annual monetary policy strategy document, the bank slashed its economic growth forecasts in 2014-16 to almost zero, anticipating that Western sanctions imposed over Russia's actions in Ukraine would last until the end of 2017 at least. It also raised its forecasts for net capital outflows to $128 billion in 2014 and $99 billion in 2015.

Separately, it said it was scrapping the rouble's corridor against a dollar-euro basket, a decision presaged by the bank's announcement last Wednesday that it would limit intervention.

On Monday the currency, which has lost almost a quarter of its value since the middle of this year, was up more than 2 percent after the central bank said it could intervene at any time to punish speculators.

The bank's view on sanctions, the first official assessment of how long they may last, tallied with that expressed by influential former finance minister Alexei Kudrin in September.

Its base scenario expected just 0.3 percent economic growth in 2014, zero growth in 2015, and 0.1 percent growth in 2016. The economy was only expected to revive modestly in 2017, when the bank expected growth to reach 1.6 percent.

Its forecast assumed a modest recovery in the oil price to $95 per barrel next year, followed by a further decline. "Oil at 95 (dollars) may be optimistic, but the assumption of sanctions staying until 2017 seems very realistic and suggests Russia is planning for the long haul," Standard Bank analyst Tim Ash said in a note.

Sanctions imposed by the United States and European Union against major Russian banks and companies over Moscow's backing for pro-Russian separatism in Ukraine have led to a virtual freeze on investment inflows that has contributed to the rouble's slide.

The falls have been amplified by growing demand for foreign currency from Russians fearful about the value of their savings, but there is little to suggest the economic woes are creating political difficulties for Putin.

On Monday he said there was no fundamental economic reason for the rouble's slide; Finance Minister Anton Siluanov also weighed in, saying it was clearly undervalued and he hoped its volatility would cease by the end of the year.

Putin's public approval rating is at a record high of 88 percent according to the Levada Centre polling agency, boosted this year by patriotic support for his policies in Ukraine, notably the annexation of Crimea in March.

"The public mood (is) that these economic hardships are the fault of the foreign enemies of Russia," said Christopher Granville, managing director of Trusted Sources, an emerging markets consultancy in London.

There has also been no sign so far that the economic difficulties have encouraged Putin to shift policy on Ukraine; fighting has worsened in the past week in the east, tearing apart a ceasefire deal between pro-Russian separatists and government forces.

Putin's policies have failed to diversify an economy largely based on natural resources and the political stand-off with the West is starving the country of badly-needed investment capital.

Even before the escalation of the Ukraine crisis this year, the economy was performing poorly, with disappointing growth of 1.3 percent in 2013, underscoring how a growth model based largely on energy exports is no longer working.

In its base scenario, the bank predicted that the Urals oil price would recover in the short term to average $95 per barrel in 2015, but fall to $90 per barrel by the end of 2017.

It said the scenario envisaging the lifting of sanctions next year was closer to official government forecasts made by the Economy Ministry, which envisage 1 percent economic growth next year. But the bank's growth expectations were also modest even if more optimistic assumptions are factored in.

If the sanctions are lifted next year, the bank predicted 0.3 percent economic growth in 2015 with oil at $95 per barrel, and 0.6 percent growth if the oil price recovers to $105.

The bank also considered more pessimistic scenarios with lower oil prices. In its worst-case "stress scenario", in which the oil price fell to $60 by the end of 2015, the economy would shrink by 3.5-4 percent in 2015.

"In working out its scenarios the Bank of Russia considered tendencies in the Russian economy in recent years, which show that existing structural constraints won't be overcome quickly," the bank said in its report. "As a result even with a more favorable combination of external factors moderate economic growth rates are forecast."